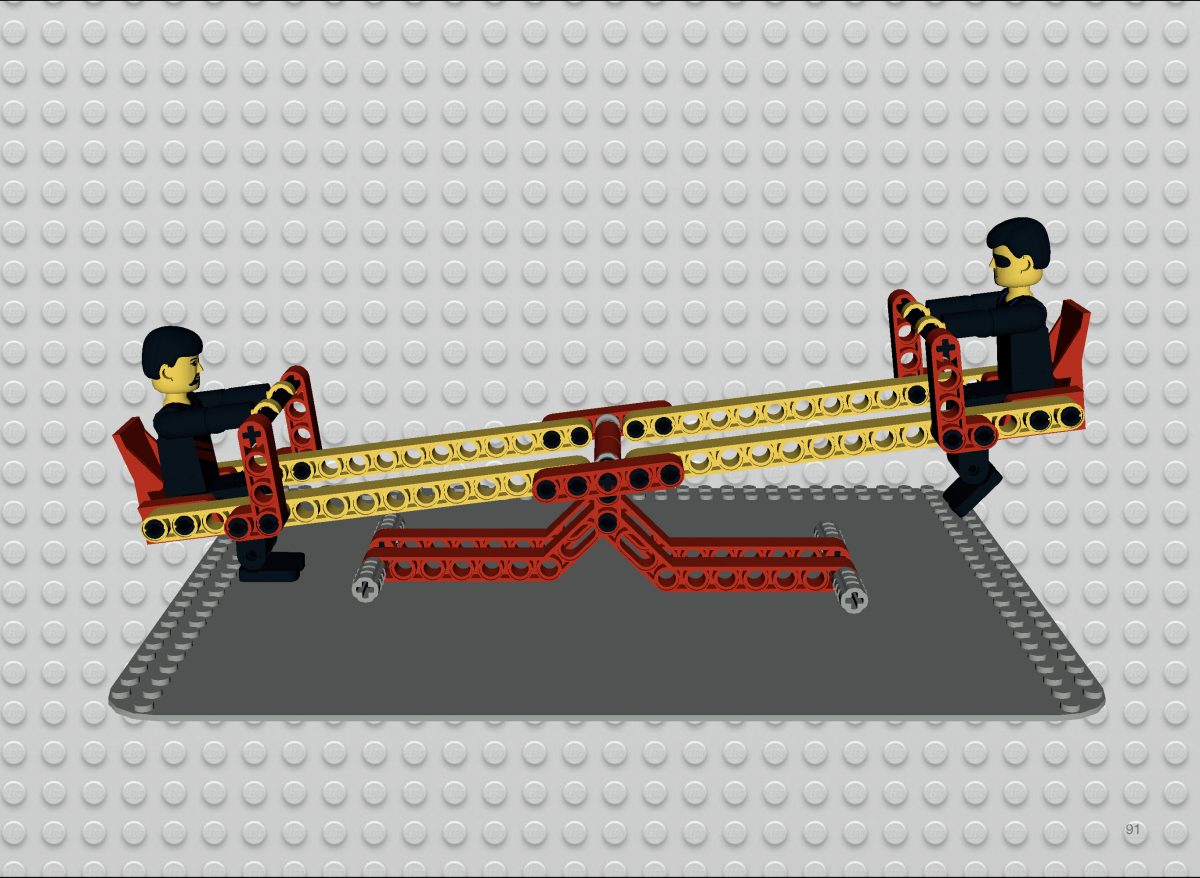 Jorge's LEGO Technic seesaw, as it appears in his LEGO Engineering Fundamentals book

Unlike many other AFOL (Adult Fan of LEGO) interviewees,who I seem to meet via Twitter, I came across Jorge after we spoke by email about his new book, LEGO Engineering Fundamentals (Apple Books link).

What got you in to the LEGO hobby?

“My first encounter with LEGO was at Christmas 1999. My son was about to turn 4 and doing Christmas shopping in the centre of Mexico City, I
discovered the Lego Technic 8230 Police Buggy model.I bought it without knowing what the LEGO Technic theme was.”

“That night when I got home the first thing I did was open the model and at that moment my life changed. I discovered a world of parts of excellent finish and precision, gears of various shapes, shafts, connectors, rubber wheels….”

“The following month I discovered the MIT course 6,270. I couldn’t imagine that someone could build robots out of LEGO Technic parts and control them with little computers and electric motors. From that moment my adventure with LEGO began.”

A dive in to LEGO robotics

“In 2007 I had the opportunity to participate in three robotics contests where I use LEGO as a fundamental part of robots -in March, I participated as the coach of a group of students from the University of Monterrey in the Third Rockwell Robochallenge 2007 National Robotics Contest organised by the Tecnológico de Monterrey, finishing second.”

“It was an obstacle course in the water and the robot was made by taking a plastic packaging box from BIONICLE….”

“In August, participate in the 4th Mexican Cleaning Robot Tournament, in the city of Puebla, Mexico. It was also a water contest. The robot had a system of LEGO scissors with which it collected cans floating in the water:”

“…and in November, participate in the VI Latin American Robotics Competition, in the city of Monterrey, Mexico. The robot had to retrieve four wooden cubes from a maze. I used two NXTs to drive the robot, which had a pneumatic system from FISCHERTECHNIK to collect the cubes. I didn’t have LEGO pneumatic: )”

“And that’s how I entered the world of LEGO.”

Wow – what a great way to become involved in the LEGO hobby, Jorge! I particularly love the use of the Bionicle packaging as a robot casing.

You’ve recently released a book, LEGO Engineering Fundamentals. What made you decide to write this book?

“Since owning an iPad, I caught my attention the Book of Life of Earth of E.O. Wilson. It was the first interactive book that handled a variety of multimedia elements that made the learning experience completely different: Videos in the book, Image Galleries, 3D Models and Interactive Images and I thought that this was going to be the future of books. However, the years passed and no books appeared that made use of these technologies.”

“In 2018 Apple released a new low-cost and incredibly powerful iPad and I decided to write a basic electronics book for the iPad where I experimented with all These techniques and the one that most attracted attention was the 3D model manipulation technique in the book.”

“So, finishing that first book, I immediately started experimenting with various techniques to be able to animate 3D models. At first I thought of using mechanical models of simple machines, made in SOLIDWORKS, but I remembered all the variety of mechanical elements that the LEGO Technic line has and that was when I focused on the LEGO 3D model editing software. After countless nights of experimentation I was able to get the steps to be able to create animated models with an impressive reality. This is how the LEGO Engineering Fundamentals book was born.”

I’ve had a chance to preview Jorge’s book, and the ability to rotate and interact with the Technic models is superb! It really helps the models to come alive in the page.

The book makes use of some nice technology to help show readers how gears and LEGO  elements interact. Could you describe how it works for us?

“An animated 3D model can come from a LEGO model or it can be a MOC. In either case, LEGO model editing software is required. In my case I use a Mac and I use LeoCAD and Studio as 3D model editors.”

“Once you have the part of the model to be animated, it is exported to animation software. In my case, depending on the complexity of the animation I use Cinema 4D or Blender, there are simple animations like turning gears and some very complex ones like chain and
lever animation. Once animated, the model goes to its final phase, which is to turn it into a widget that is placed in Apple’s book editor.”

Wow – quite an involved process! Luckily for readers of the book, all you need is a iPad (or iPhone) to see the animations.

What was your favourite model in the book?

“There are models that I had a lot of fun when I tried to animate them such as the minfigure that dances the Moonwalk of Michael Jackson or the seesaw with the minifigures.”

“There are others, like the 8422 Circuit Shock Racer transmission animation, which cost me many sleepless nights. However, my favourite model is the four speed gearbox.To animate it, I had to understand the design of transmission boxes and the complexity of their operation, to make the animation as real as possible.”

What was the first LEGO set you received as a child? Do you still have it?

“When I was a kid, I was always surrounded by construction toys.
In those days LEGO was not one of the toys that were commonly found in stores in Mexico, however there was a brand called “idema”, which were small plastic building blocks, containing small metal axles and wheels, which allowed the construction of vehicles.”

Later a line of construction toys appeared a little more specialised: “Tenté”, which included round panel shapes to build all kinds of ships. Along with these toys I always grew up with a “Meccano” at home.”

Image from this lovely blog post about Tente and LEGO.

What’s your favourite LEGO set of all time?

I’d forgotten that set existed! I always lusted after this one in the catalogues as a child; it seemed very futuristic to me.

“The technic Brick 1×16 with holes, I think it is the most representative piece of LEGO Technic.”

A solid (or not-quite-so-solid!) choice, Jorge.

If you could bring back a previous LEGO theme, which one
would you save?

“BIONICLE, I really enjoyed these sets since they have many pieces compatible with the Technic line, in addition to having unique technical pieces that allow creating interesting models, such as a robotic gripper, in addition to the fact that I spent many hours playing with my son.”

BIONICLE certainly spawned a huge following (and helped to save LEGO all those years ago) which is still active today – as well as a variety of interesting elements AFOLs are still finding interesting ways to incorporate in to more traditional LEGO models.