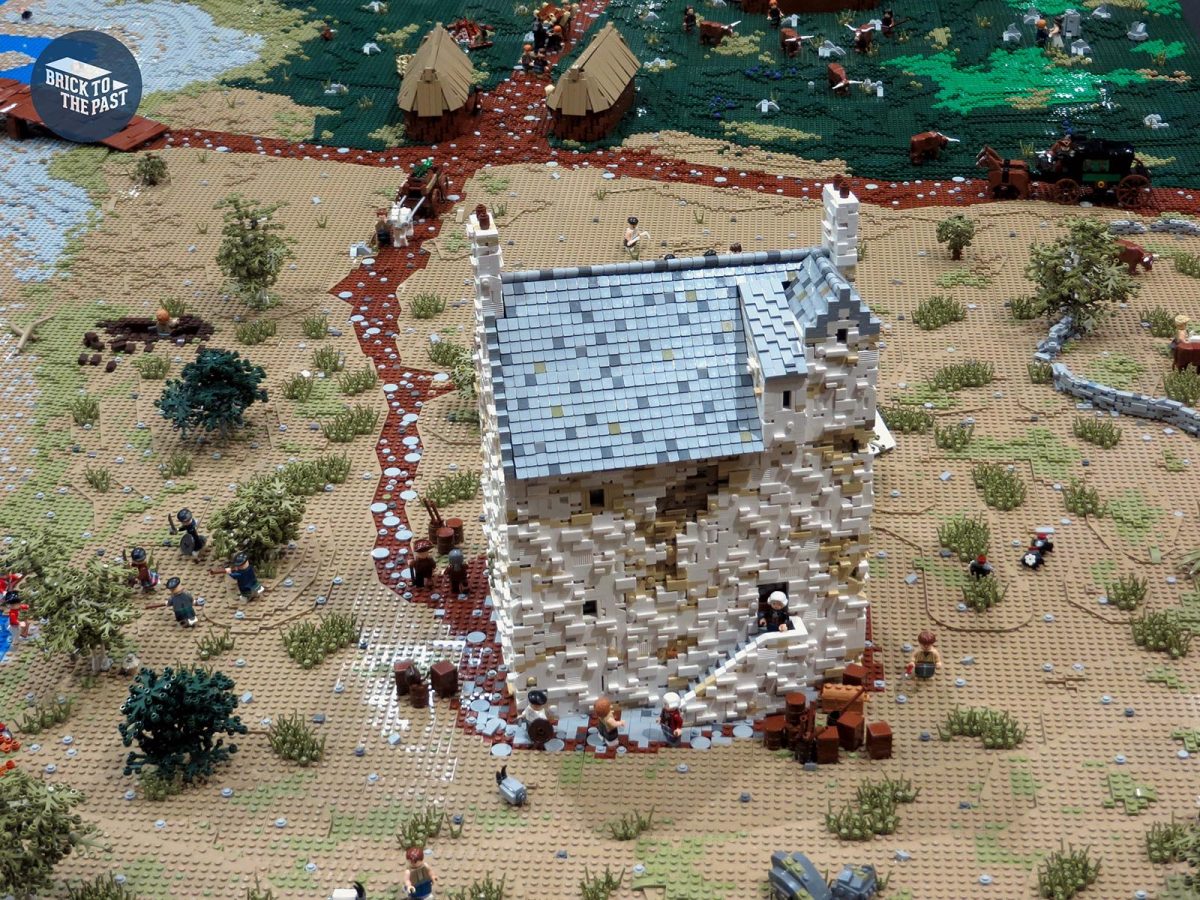 Dan's brilliant LEGO model of Corgarff Castle on the Brick To The Past display at Bricktastic this year.

I first came across Dan Harris, aka @DiasporaDan, attending LEGO shows here in the UK; it’s hard to miss the Brick To The Past builds he’s part of!

Dan lives in Nethy Bridge, Scotland, and works as a town planner by day. He is part of the Brick To The Past cooperative of adult LEGO builders who build an impressive, large scale LEGO model based around a historical event.

What is your favourite LEGO set?

“That’s an easy one – 6081-1: King’s Mountain Fortress from 1990. I was given it for my 8th birthday and it was awesome! I’d wanted the set for ages, partly because castles are cool, and partly because it looked a bit like some of the local Welsh castles my parents would drag me around during my summer holidays. I still think the set’s design is amazing – it’s possible to imagine it as a real castle, which is something I think has been missing from more recent runs of Castle sets. The other thing with these old sets is that they were packed with play features and minifigures. Me and my brothers played with that castle for years!”

Castles from the 90s were fantastic; my “big castle” set as a child was  LEGO Royal Knight´s Castle 6090; I loved the size of it, and the working drawbridge, portcullis and all the spaces you could hide figures in.

“This is a really hard question because I like different models for different reasons and identifying what’s ‘best’ can mean a whole load of things. I also build most of my stuff with the other guys in Brick to the Past, so I tend to be influenced by how pleased I am with the collaboration. This can mean taking account how challenging that collaboration was to manage and achieve!

I have a real soft spot for the first Brick to the Past collaboration I was involved in, which was 2015’s model of Hadrian’s Wall. I built the Roman town outside of the fort, known as a Vicus, which at the time was the biggest model I had ever built. I even moved from Wales to the Scottish Highlands during this period so to me getting it done felt like a massive achievement. I learned a lot of new techniques and a lot about the logistics of building big models, so it was a hugely significant step for me.

However, I also really like some of my later models. Last year’s Brick to the Past Jacobite Rising model is particularly special because I got to build a couple of buildings that are near my house – namely Corgarff Castle and Ruthven Barracks. It was great being able to reimagine what these places looked like back in the 18th century and then try and replicate them in LEGO. ”

I love Roman history and the Brick To The Past Hadrian’s Wall build was definitely my favourite! 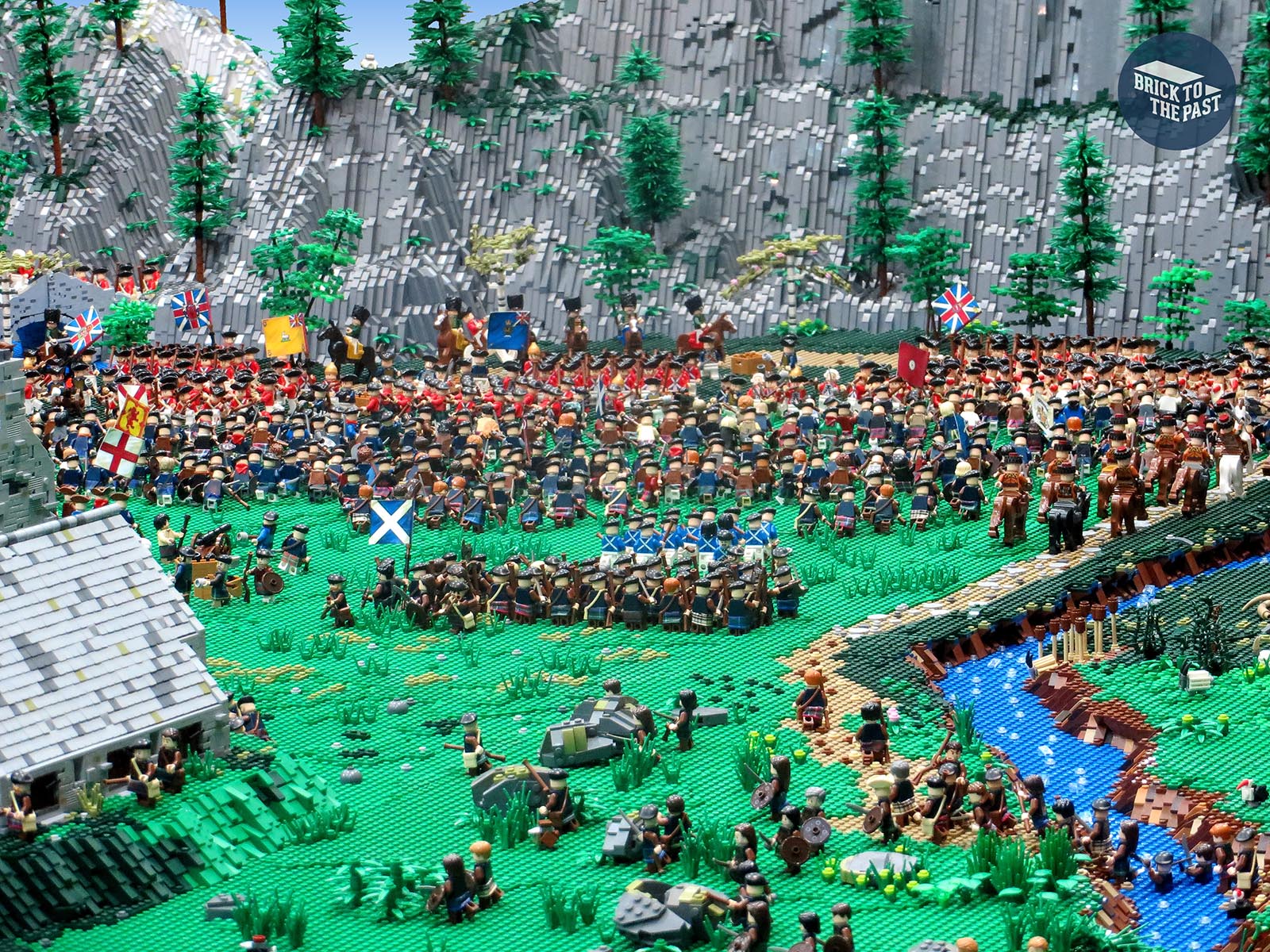 “There are so many great builders I admire that I could not possibly list them all here. Plus there’s lots of new talent appearing all the time and I’m always finding new people to admire.

Instead I’ll tell you the story of how I became an AFOL because it was actually inspired by my fellow Brick to the Past builder James Pegrum, though I had no idea who he was at the time. Back in 2013 I was coming to the end of my Master’s degree and instead of writing up my dissertation I was doing some world class procrastination on the Internet. I don’t remember how but I came across an article on METRO’s website about James’ history of Britain models and was totally blown away by what he’d done. I couldn’t believe that it was possible to be so creative with LEGO and really wanted to give it a go myself… so I did, and here I am! I’ve never told James this story.”

James is another fantastic builder – but you’re right, there are plenty of great builders around. What always amazes me about the BTTP LEGO builds is the sheer scale of them, and how you maintain a very consistent high quality throughout.

There is definitely something to be said for working collaboratively on LEGO models and displays; this was part of the thinking behind starting the LEGO Northern UK Railway cooperative to build larger scale displays between multiple members. It’s nice to have other LEGO fans to be able to bounce your ideas off, and to ask for help or inspiration when you’re feeling stuck.

“Don’t really have one, but anything that helps achieve a nice bit of SNOT (studs not on top, a build technique) will do; so headlight bricks, ‘Dalek’ bricks or anything with a stud on the side is good. While very common and pretty unremarkable they provide so many opportunities for innovation.”

I love the introduction of new SNOT elements – it’s amazing what a seemingly boring element can do to enhance a model – creating a new angle you haven’t been able to achieve before, or making a more secure connection in an existing LEGO model.

“I’ve just finished off a commissioned model of a Scottish Iron Age hillfort, which was a big job so I’m taking a bit of downtime. However, I have begun work on a currently secret LEGO mosaic which promises to be something very special and have also started work on next year’s Brick to the Past model, which will commemorate the 200th anniversary of the Peterloo Massacre.

I’m really looking forward to the Peterloo build. It’s one of the defining moments in British political history and one which carries lessons for us today about the relationships between people, politics and power. We will be unveiling it at next year’s Bricktastic event in Manchester, which is incredible because the venue sits almost exactly where the massacre took place.

We are working with Paul Fiztgerald and Eva Schlunke of the Peterloo Memorial Trust to set the tone and get the historical details as accurate as possible. Paul and Eva are currently working on a graphic novel about the Massacre, which is due out next year. They have already produced some stunning images which are helping us hugely. You can find out more on their Kickstarter page.”

I can’t wait to see next year’s BTTP build! And such a nice tie in with the venue, too.

“Pretty much everything I build is historically themed, so usually the sources of information are pretty standard – namely books, site visits and occasionally television or film adaptations.

However, I have occasionally found myself drifting into other territory and while most of these ideas never get realised, a few years ago I made a little model based on sci-fi comic 2000AD’s Rogue Trooper strip, originally created by Gerry Finlay-Day and Dave Gibbons back in 1981. I do like a bit of science fiction, so you never know, one day I might build some more – watch out spacers!”

Which LEGO theme do you wish LEGO would bring back?

“Castle. Obvs. And don’t give me any of this Nexo Knights crap; I want proper feudalism, peasants, dirt and goats.”

“I moved house again last year and now have a dedicated LEGO room. I have been meaning to install shelves and do all sorts of fancy things with storage, but to date, have achieved none of this; the to-do list grows ever longer.

Storage is actually becoming a real problem because for the last couple of years I’ve kept all of my Brick to the Past models intact. This means that my spare bedroom is currently home to four large LEGO models all packed into boxes, plus another large model under construction in the LEGO room. My wife has recently pointed out that when we bought the house having LEGO in every room was not part of the plan… so I will need to address this soon.”

LEGO storage is always an issue for AFOLs! My LEGO collection seems to grow to fill the space available (and beyond!).