LEGO track geometry and all of those square-edged bricks can feel very restraining to newcomers to LEGO train modeling: how do you go about creating something that looks realistic and natural? There’s a (smallish) collection of LEGO fans who love building LEGO train layouts (or “L-gauge”, as it’s known); I’d class myself as one of […]

LEGO track geometry and all of those square-edged bricks can feel very restraining to newcomers to LEGO train modeling: how do you go about creating something that looks realistic and natural?

There’s a (smallish) collection of LEGO fans who love building LEGO train layouts (or “L-gauge”, as it’s known); I’d class myself as one of them (see my recent display for Bricktastic 2015) – there’s something about building your own buildings, scenery and trains and seeing them run which is addictive (and has proven an expensive hobby ever since!).

My inspiration for LEGO train displays

There are some truly great LEGO train layouts I looked to when starting my descent in to LEGO train addiction: builders like Carl Greatrix, Cale Leiphart and Michael Gale have all built fantastic train displays in LEGO in their respective styles, and are a great place to start for new LEGO train enthusiasts.But what can LEGO train MOCers learn from the traditional model railway hobbyists?

I think we can learn a lot from the more traditional model train modelers. As part of my inspiration and research, I look at traditional railway models and displays, and see what I can transfer from that in to LEGO. Sometimes, even the smallest details can help bring a layout to life!

So, this article comprises a collection of my thoughts on what LEGO train MOCers can learn from more traditional railway modelling such as OO (HO in America), N and O gauges.

Collaboration between LEGO builders is great: it allows for larger railway displays to be created to a high standard, and also allows for more varied rolling stock to be used.

Some of the larger LEGO train layouts you might have seen at LEGO shows in America and Europe such as this Twin Cities LUG layout and the annual STEAM show in the UK will have been put together by a collective of different LEGO builders, some spread out geographically. Building modularly really helps with this approach, allowing each builder to focus on a specific section of the layout.

2. A fiddle yard is handy to have!

For those who aren’t aware, a fiddle yard is a collection of sidings and passing loops hidden from visitors’ views, which allows you to introduce new trains to a display without having to do some on part of the layout visible to the public.

3. You don’t have build a LEGO train layout entirely in LEGO 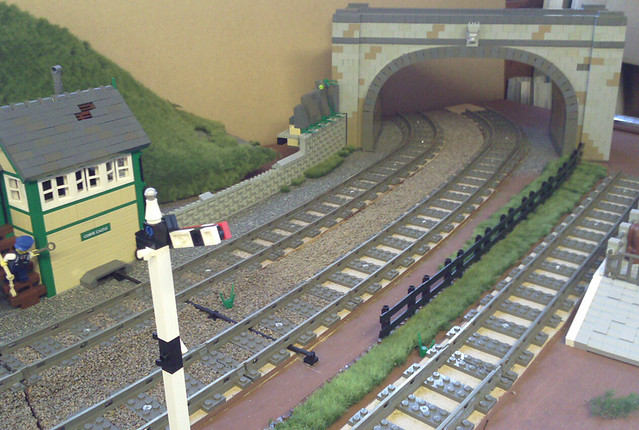 You could consider building your LEGO train layout using LEGO and other media.

For example Carl Greatrix’s Corfe Castle layout uses traditional model railway scenery alongside LEGO trains and buildings to great effect. One advantage of this approach is that the landscape can look a lot more natural. Landscaping in LEGO can also become very expensive, especially once you introduce gradients and hills, so this could be a way to introduce some interesting features on a lower budget, too.

4. You can build off the grid

One of the reasons LEGO displays can look so square and unrealistic is that LEGO track can be limiting in how it can be constructed (see my simple double-loop used at Bricktastic 2015, above). Real railway track doesn’t just sit at 90 degree angles – it cuts through the landscape at all sorts of angles (see my previous article on LEGO track geometry for some ideas around this) and traditional model railway-ers are adept at reflecting that in their layouts. 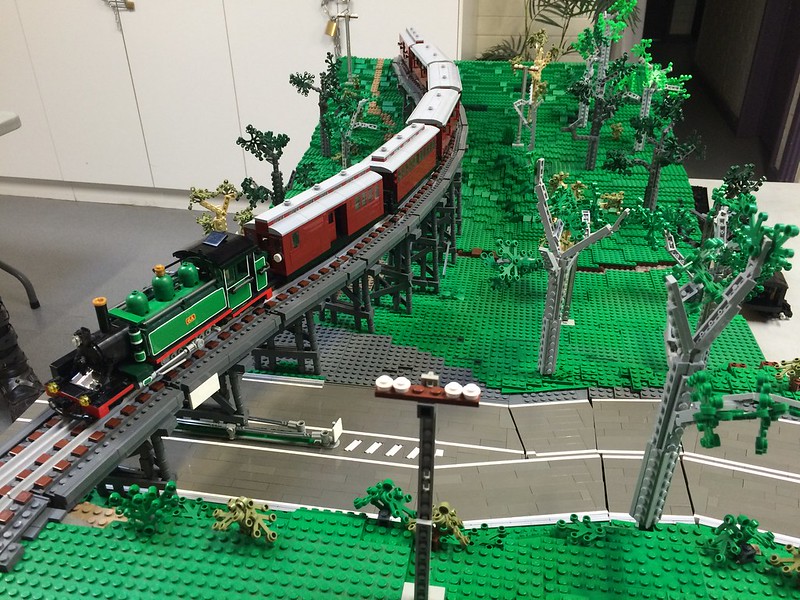 As discussed above, adding gradients to your LEGO layout can become very expensive, and make transporting your display to LEGO shows much harder, too. This example shows how a valley can create a great opportunity for a bridge.