One of Stewart's Fabuland displays

As with many of my LEGO fan interviewees (or victims!), I first came across Stewart Cromar, aka Stubot, on Twitter.

Stewart is based in Edinburgh, Scotland, has has built models in quite a range of themes. The Fabuland builds are brilliantly done and caught my eye in particular, but Stewart is probably best known for his Ada Lovelace and Charles Babbage-inspired LEGO Ideas set which reached 10,000 votes, but was sadly not put in to production.

“‘Jet Airliner’ (#6368) from 1985 is sheer perfection. The brick built red and black stripe all the way around makes it very distinctive (and sticker free). It even uses the back of two Erling bricks for side mounting each jet engine, pretty snazzy techniques for its time.

I can recall playing with this one for hours on end, with its hinged roof and room inside for four minifigures there were so many storytelling possibilities. My favourite was pretending this was the private jet belonging to Krystle and Blake Carrington, what eight-year-old didn’t love Dynasty?

I still have my original instructions, but their tattered condition speaks volumes about how many times the Carrington’s plane crash landed and required rebuilding.”

That set is definitely a classic – and sticker free is a bonus for most AFOLs even now! 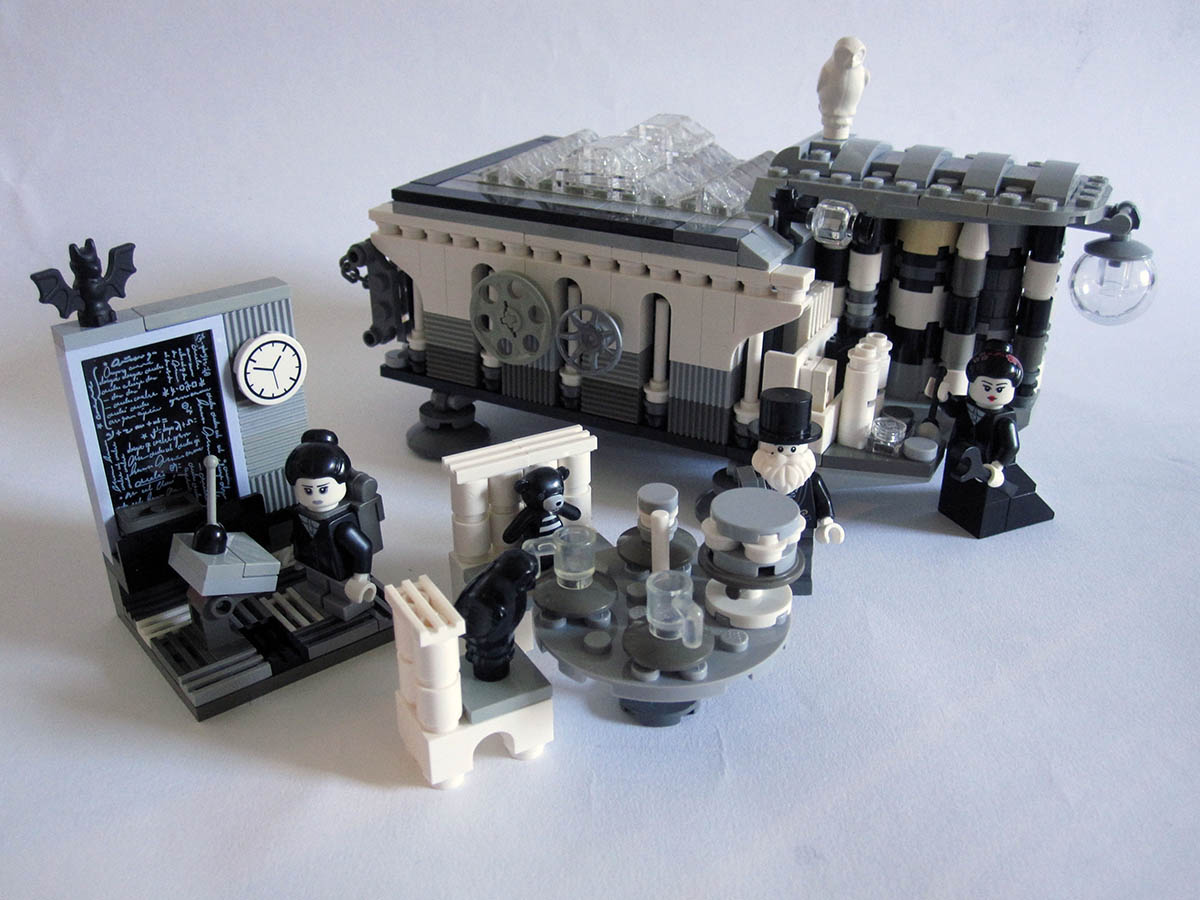 “In terms of measurable impact, it would probably be my 2015 ‘Lovelace and Babbage’ LEGO Ideas project. It was a monochromatic MOC designed to celebrate the first published computer programmer and the first mechanical computer.

With amazing support from Ada Lovelace fans worldwide it garnered over 2.5 million impressions (or views). It reached the 10,000 public votes target in 2016 but was ultimately not selected for production by LEGO.

I originally started this build as a personal and emotional response to the sudden passing of my father David Alexander Cromar. He was a mechanical engineer, just like Charles Babbage, and this felt like a fitting tribute to him. Everyone deals with grief differently and LEGO ended up being a surprising source of positivity for my family.

My proudest moment was being invited to present a short paper about my LEGO project at the University of Oxford’s official ‘Ada Lovelace Symposium’ for the 200th anniversary of her birth.”

As a computer scientist in a past life, this Ideas set really appealed to me; such a shame it never made it in to production! What an honour to be invited to the Univeristy of Oxford, too – a great achievement in itself.

“My last few builds have involved splicing old Fabuland elements with contemporary system bricks. Attempting to blend the two successfully is a challenge I’m excited to continue with.

“There a few Instagram builders at the minute who really shine for me. It’s such a perfect platform for them to showcase both expertise and creativity.

Elemental Lego publishes the most fantastical microscale Star Wars creations. They are even kind enough to share building instructions, the Sandcrawler being an absolute classic.

My other Insta obsession is Legotruman who designs adorable animal BrickHeadz. There is a lot of competition in this area, but their kawaii designs strongly resonate with me. I think you can feel the love put into each design, especially in regard to how they’re posed, the otter floating on its back is everything.”

Some excellent recommendations there, Stewart – I don’t think I’d seen the microscale Sandcrawler before!

“After finally sorting my LEGO hoard into bins last year I soon realised the most prevalent colour I own is white. I absolutely love white elements, not only are they versatile for any MOC but they proudly show off their age. Like counting rings on a tree trunk, the level of yellowness helps me determine a brick’s date of birth.

No two whites are ever the same and IMHO this makes for a more beautiful build. Retrobrighting ABS is like erasing its play history, I only condone Fairy Liquid and a light toothbrush scrubbing!”

“As a child the baguette piece was my most cherished element due to its relative rarity. I remember fondly the day my mum bought me the ‘Rufus Rabbit’ (#3708) Fabuland set from our local Co-op. He only came with a basket and two wee baguettes, but it was everything I could want.

On our most recent RLUG trip to Billund I spotted this classic element in the Legoland P&B wall. Suffice to say I filled an entire bag and am now creating a new MOC that will hopefully showcase some new uses for this somewhat simplistic bread piece. With only one obvious connection point it’s been an exciting challenge to see what nonsense I can build with it.” 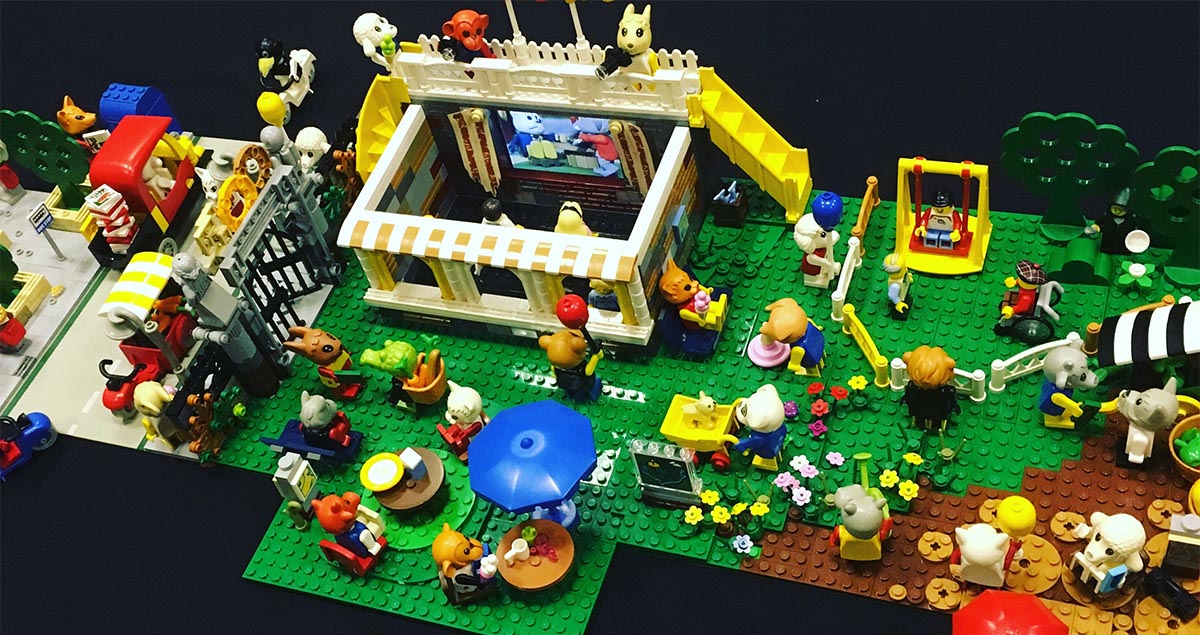 “Would the Twilight Zone TV show count as unlikely? There is an excellent 1960 episode called ‘People Are Alike All Over’ where an astronaut lands on Mars only to end up imprisoned by the natives in an alien zoo.

This inspired me to create my ‘OOZ’ MOC for a Glasgow LEGO show where my Fabuland animals pay to observe human minifigs held within cages. To be fair, their accommodation is pretty swanky, unlimited popcorn and 24-hour screenings of the Fabuland TV show ‘Edward and Friends’ courtesy of a concealed iPhone.

Conversely, as an amateur artist I’ve also worked on a series of mixed-media paintings where specific LEGO models have provided direct inspiration for an artwork. Photocopied building instructions from my childhood sets were repurposed as abstract monochromatic landscapes. When combined with acrylic paints and charcoal markings the LEGO illustrations become less recognisable but went on to provide me with unusual textures and satisfying patterns.”

“Typically, on my living room floor. Things get messy quickly and I fully embrace the chaos. I’m a firm believer in happenstance and some of my favourite ideas have come out of random brick pairings.”

I suspect many LEGO fans build like that! My build table certainly gets messy as I find solutions to design challenges for LEGO models, and as you say, sometimes the solution comes from pairing unusual elements together.

“I often think I’d like Fabuland to make a return appearance, but I truly love the fact it’s officially vintage and somewhat uncommon at LEGO exhibitions.

It might not be an obvious choice, but one theme I think merits a second chance is Paradisa. It’s perky colour palette and carefree scenarios always make me smile.

‘Seaside Holiday Cottage’ (#6489) has all the key ingredients to the perfect existence. Have you ever seen a happier minifigure than one sipping a cocktail, relaxing on a wee catamaran, whilst watching dolphins frolic in the breaking waves?”

I had a feeling this interview would end with you asking for Fabuland back! I don’t think you’d be alone, though I suppose its charm is that is a vintage theme these days.

Paradisa (a sub-theme of LEGO Town) would be great to see again too; I remember it fondly as a child – and I’ve since inherited the sets from my sister!