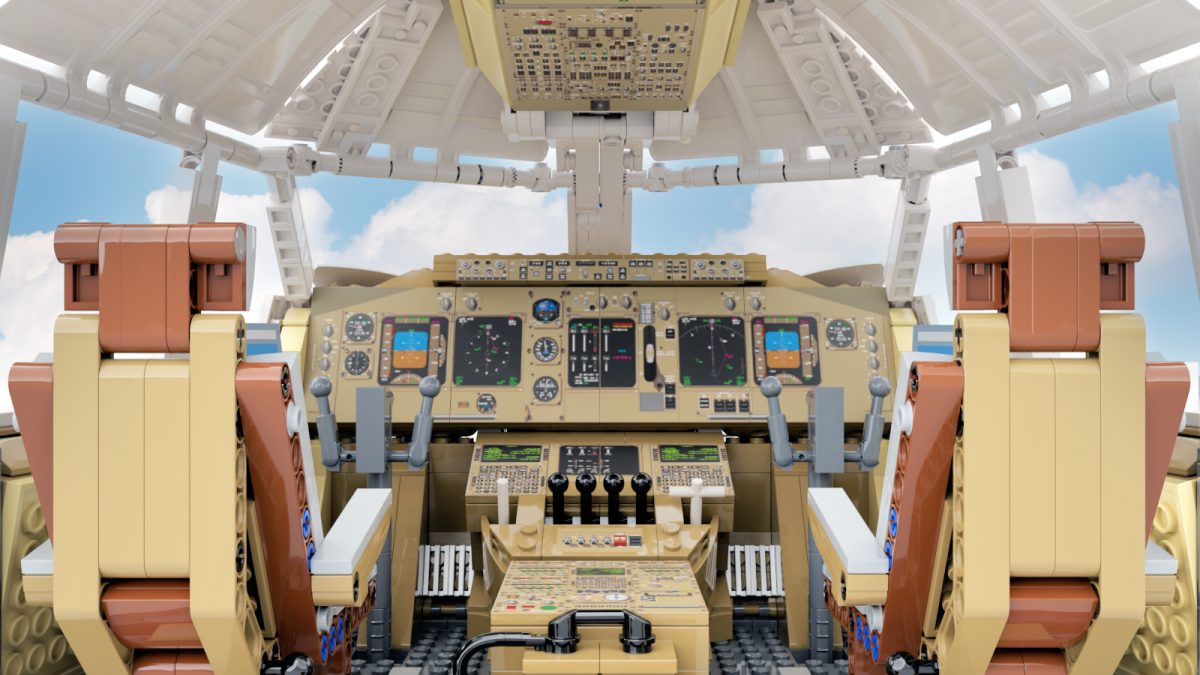 We see a lot of LEGO Ideas projects floating around on social media, but Daz’s cockpit model really stood out!

In this LEGO fan interview we speak to the Australian LEGO fan about his path in to the LEGO hobby, and the development of his Boeing 747 cockpit LEGO model.

You can view and support his Boeing 747 cockpit model on LEGO Ideas.

“I enjoyed building LEGO as a child (I can recall building set 850 Fork-Lift Truck and 852 Helicopter – kind of showing my age there), though it wasn’t until about 4 years ago my wife bought me the 75105 Millennium Falcon for Christmas. I wonder if she ever regrets it as now half the house is taken up with LEGO. I have, like many other people, ventured into MOC’s and designing my own builds.”

The forklift is a great set – I love the simplicity of the final model and the play features.

“Would have to be the 75192 Millennium Falcon. I have it standing vertically in my study cabinet as my pride and joy. It’s a little tricky to get it vertical but I managed to do it. Fantastic build.”

The size and detail that goes in to the UCS models really impresses me, even if I’m not the world’s largest Star Wars fans!

If you could bring back an old LEGO theme, which would you pick?

“Maybe Life on Mars, though do it differently. That theme was run about 20 years ago, and both technology and sci-fi has come a long way since. If it were revamped while modernised, it could produce some cool sets.”

I somehow hadn’t come across that LEGO theme before – some interesting figure designs and spaceships, even though it seemed to only last a year.

Are you a member of a LEGO User Group? If so, which one, and do you find it useful to be in a group with other LEGO fans?

“Yes I joined BrisBricks last year – my local LUP in Brisbane, Australia. After joining, COVID hit and I never got to attend any meetings (well I don’t think there were any last year anyway). Never-the-less, they have reached out again recently so will go in and meet my fellow AFOL’s shortly. Presently it’s been mostly online forums and groups, though everyone around the world is just as friendly and helpful – just can’t shake their hand and have a coffee.”

Definitely bad timing for joining a LUG! Once Covid restrictions die down it’s definitely worth getting involved – I think many adult LEGO fans find the socialising side of LEGO User Groups (see our UK list of LUGs here) the most enjoyable part.

Are there any other LEGO builders who inspire you?

“Maybe you know of Brent Waller? He is also from Brisbane and he was kind enough to share some inspiration for the Lego Ideas program last year. We both have different tastes, though it was pleasant to see that when you put your mind to it (and some effort), you can reach lofty goals. If we are name dropping, I’ll send a quick shoutout to Thomas Lajon (France) and Gab Kremo (Germany) who I find do some very good designs and both willing to share and critique.”

Brent was new to me (although I was familiar with the Seinfield and Ghostbusters sets, as will many readers be), and there are some fantastic models I can see he’s designed on hisInstagram account. Some great familiar names on the list too!

You have a commercial airline cockpit-themed project on LEGO Ideas at the moment – tell us about it?

“I decided to do a new LEGO Idea and started thinking about what could be cool, looks great, has never been attempted before, has some functionality and would be a good build.”

“The cockpit kept coming back to me, so I put my head down and started designing. I started with from the throttles and then scaled from there. The throttles, flap and spoiler controls and joystick all move as well as sliding seats with moving armrests. Both joysticks are linked for pitch control, so move one and the other moves along with it. It was fun to design and a lot of interest from the aviation community who feel they lack Lego content. The build includes 1,873 pieces, a rubber band, two pilot minifigures and a name plate. I’ve had quite a few 747 pilots tell me they are impressed, and some people thought I worked for Boeing! I built it using photos for source material – that’s it.”

There’s a huge amount of detail in the cockpit – truly impressive. It’s a hard shape to capture and looks the part. Well worth a look on the LEGO Ideas page.

What was the hardest bit of the LEGO Ideas model to design?

“It would definitely be the nose (which is the back of the model) followed by the roof. Trying to maintain the aircraft fuselage contours is very tricky while attempting to keep it looking ok and using minimal bricks to do so. I spend about a week designing the nose and the same time building the roof. Following some feedback, I revisited the nose and did both a short and extended version.”