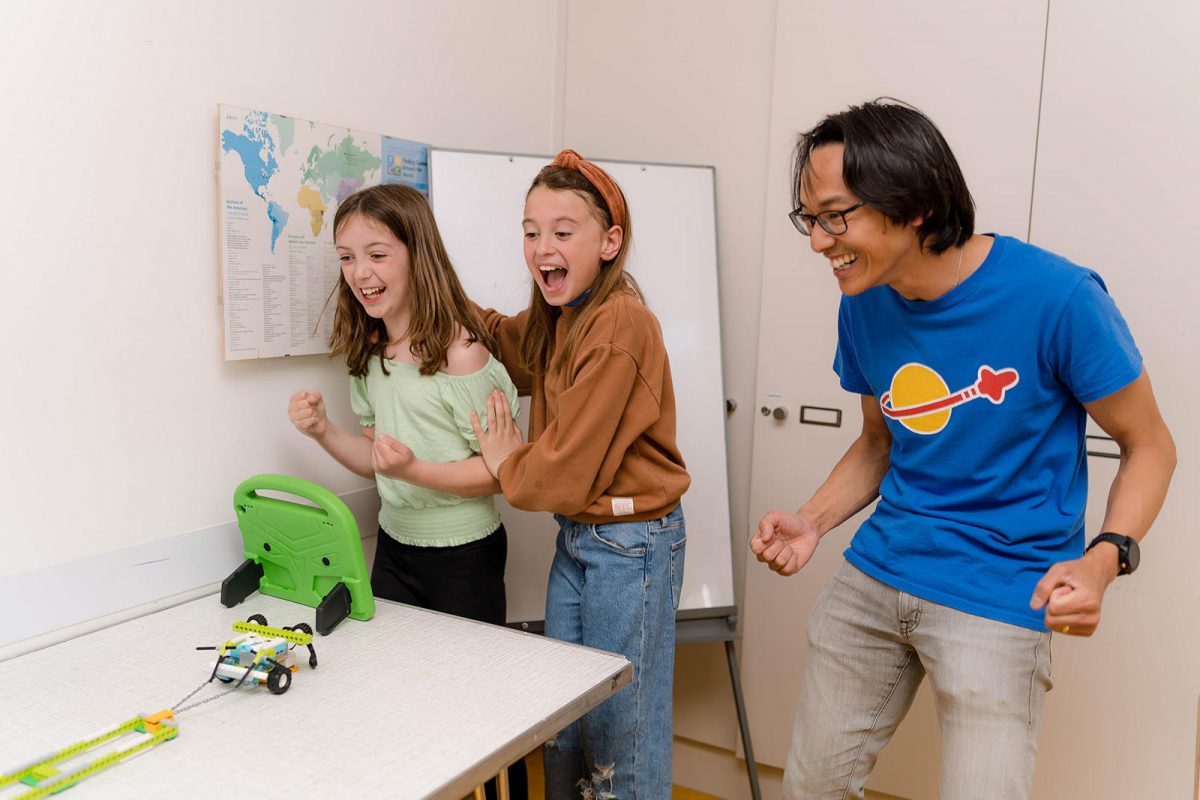 LEGO fan interview with Andy Hoang of Beyond Blocks

We first noticed Andy Hoang on social media some time ago, and his enthusiasm for using LEGO bricks as an educational tool is really infectious. He runs Beyond Blocks, a business specialising in LEGO robotic workshops in South West London.

“It has to be the LEGO WeDo 2.0, set 45300. I work with it every day and I never tire of it. In my opinion, it’s the most perfect set that LEGO Education have ever made.

It has just the right number and assortment of pieces to create an unlimited amount of inspired models and because of how popular it was in schools, it’s built up it’s own dedicated fan base.

As a result, this is easily the set that has the most variant models I’ve ever seen. Even now that it’s out of production, the fans keep on pumping out new models. It’s the set that just keeps on giving.”

It’s really amazing what you can achieve with the LEGO robotics kits these days. I had an original Mindstorms kit as a child and that blew my mind!

How did you get in to LEGO as an adult?

“I had LEGO growing up and remember playing with some great Technic sets in the 90s. I forgot all about LEGO for a while, but I started using LEGO to teach some concepts in my science classes and realised how amazingly well designed it was and how well suited it was to teaching, so started looking into how else I could use it for teaching. The more I looked into it, the more I realised how much more you could do with LEGO as an adult than I had the chance to do when I was a kid, but it was all still grounded in something so familiar.

Probably the standout moment for me as an adult was when I first attended a WeDo 2.0 training session. It just blew me away when I realised how much fun this thing would bring into my (otherwise quite dull) physics classroom. I was hooked.”

If you could bring back a retired LEGO theme, which would it be, and why?

“I’m not quite sure it was a theme as such, but the one set I would bring back, was LEGO Education Early Simple Machines, which was a Duplo set that used Duplo Sized Technic pieces.

It had these HUGE cogs and really thick axles and little kids made the cutest things out of it that were mechanically quite complex. It was a wonderful set and I only really discovered it after it had gone out of production. I absolutely love building with it and it teaches all the things I would teach older children about mechanics and somehow, by making all the pieces really large, it manages to be really endearing.”

As a massive DUPLO fan, I feel I let myself down by not knowing about these – they’re brilliant! 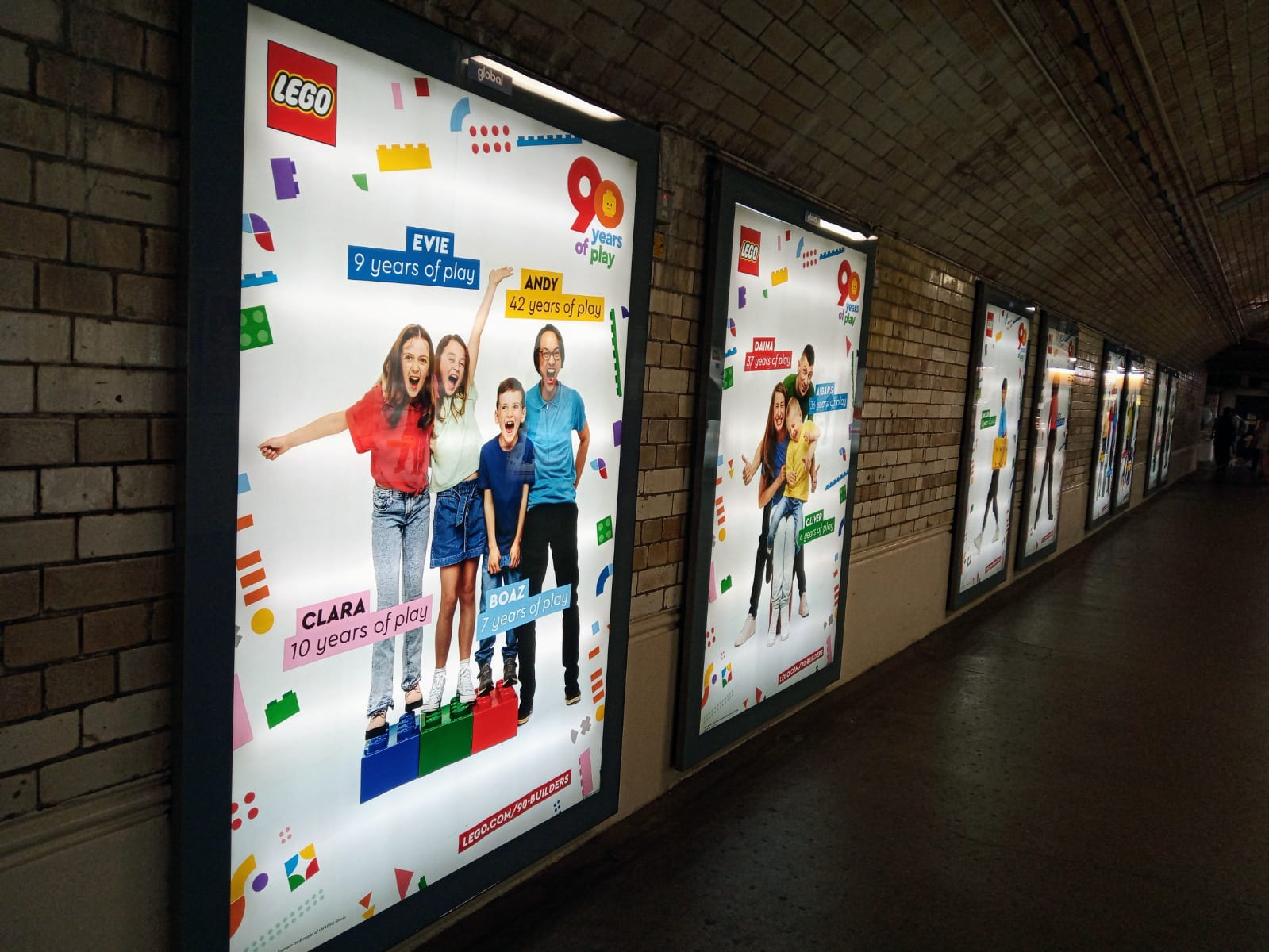 You had a photoshoot with internationally renowned photographer Rankin recently as part of LEGO’s 90 Years Of Play celebrations. Tell us about that!

“One of the parents saw that LEGO had posted up a competition to be in the posters for the 90th anniversary and sent it straight to me. They needed people who play with LEGO across the generations, and I do that every day, so it made sense to enter. I was amazed when I was picked as one of the winners!

My love for LEGO is really enhanced by working with children. On my own, I probably don’t play with LEGO as much as you would think, but when I am with the children I find it inspiring to see what they come up with, how they solve problems and how much fun they have with it. I suppose I’m a conduit really.

So the photoshoot really was a great chance to spend some time with some of my wonderful students and their families. We made our way up on the train to Rankin’s studio where we met the man himself and had a great time getting made up and trying on outfits.  I brought a LEGO WeDo 2.0 (yes I try not to go anywhere without one) and we built a few robots on the train there and back.

The shoot itself was great fun. Rankin was really down to earth and he even let the kids take some of the photos while he coached them on the camera. It was a really unforgettable experience and to top it off, LEGO made sure we went home with the 90th anniversary set each, as well as loads of LEGO merch.

What was funnier though was what happened next. When the posters went out, they went up across London, with one in the subway at South Kensington leading to the museums. On the day they went up, one of the girls, Clara, was on a school trip to the Science Museum. So as she turns the corner to go down the tunnel with all the kids in her year group, she comes face to face with a huge poster of herself! Her friends were amazed and thought that she was the coolest person ever! ”

Never leave home without a WeDo kit – a man after my own heart!

What’s the best thing you’ve seen someone do with a LEGO robotics kit?

“I’m always amazed by every iteration of David Gilday’s Mindcuber. He’s been making them for years but it still astounds me and every time I take one to a show, it always blows everyone away. ”

That is well worth a watch! Really mesmerising to watch. I had the pleasure of watching a friend race one of these in completing a Rubix cube at Discovery Brick Show the other year – incredible what LEGO can do these days.

Which other builders inspire you?

My favourite builders are: 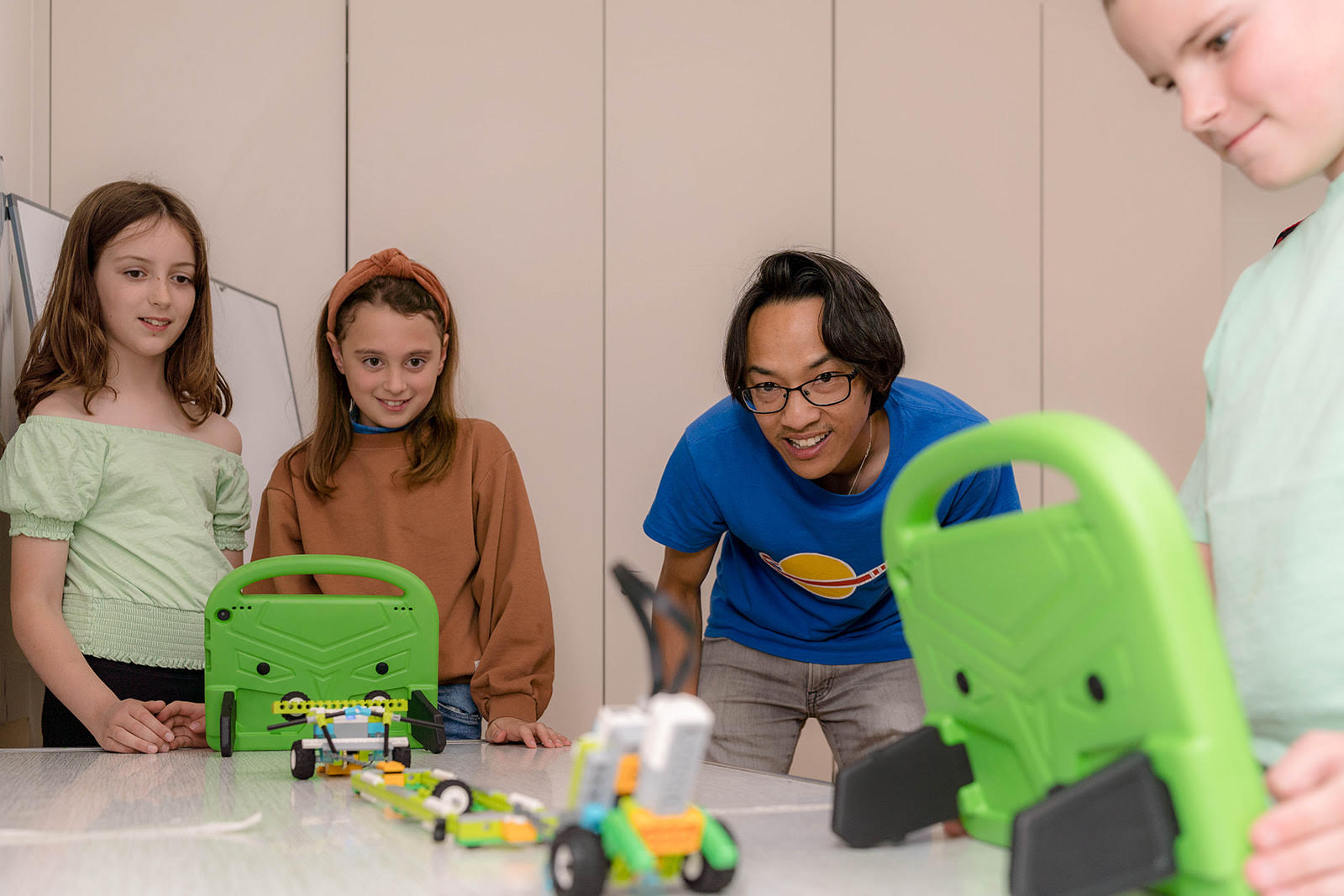 What’s next for LEGO robotics?

“That’s a really interesting question. The WeDo 2.0 era is officially at an end as far as LEGO Education are concerned as they ceased production of this set in 2021 and rolled out the replacement set, Spike Essential. Personally, I won’t be moving to the Spike Essential for my clubs, as I think that the WeDo 2.0 is easily a superior set, it has much better models and at that age, we’re aiming to teach the foundations of programming, engineering and problem solving, so I personally don’t see any need to “upgrade” to the newer sets.

That being said, at the upper end, I can see really exciting things happening with the new Mindstorms set, which recently introduced Machine Learning into its arsenal. I can’t wait to see what the community make with this.

Also, I’m excited to see the official Raspberry Pi collaboration with LEGO in the form of the Build Hat. It’s really interesting to see LEGO opening out and I’m so interested to see what fruits this bears.”

What is the next thing LEGO should add to its robotic systems?

“I get asked at least once a term if the helicopter they are building will actually fly. Come on LEGO, when are you going to let me answer this with “YES!”

There are a few companies that make LEGO compatible drones, but I would love to see something powerful enough and robust enough to actually fly LEGO around a room. That would be so awesome!”

What’s your next LEGO project?

“I’ve just got a few more EV3 Education sets with the Expansion kit and I’ve been wanting to build the Elephant forever. That’s got to be next on my hitlist.”

Oh wow – I hadn’t seen that before! It is superb. Great pick!