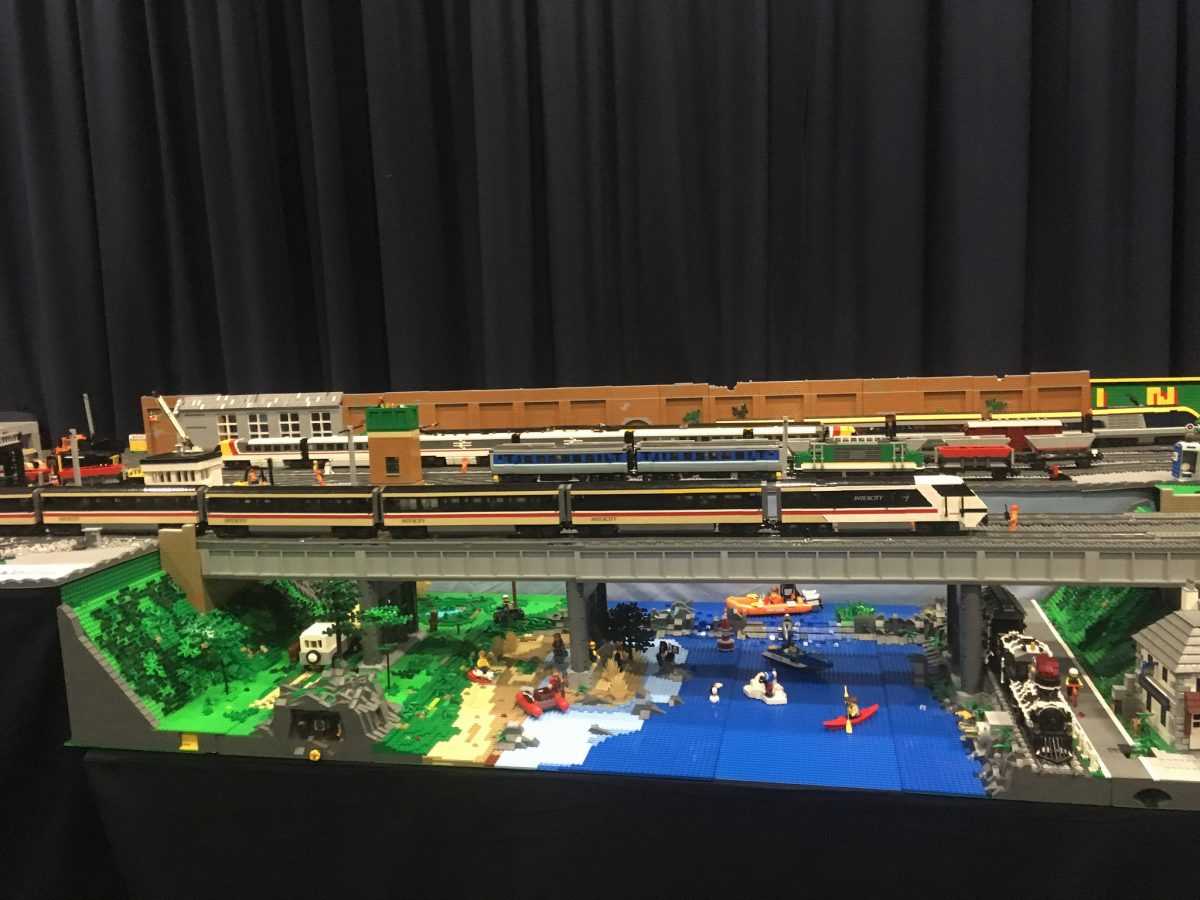 One of Richard's favourite models: this 6ft long railway bridge and valley

In a bit of a departure from our usual AFOL interview format, it’s my turn to be interviewed, so I’ve passed the baton across to Caz to question me about my LEGO hobby and model building.

I’m Richard Carter, aka “Bricks McGee”. Bricks McGee started as a bit of a joke name, and it ended up sticking – the website is now just over 6 years old, to my amazement. I’m an adult fan of LEGO (an AFOL), and am based in Newcastle upon Tyne in the North East of England.

For me, LEGO is a hobby, and also part of my profession, as I run LEGO workshops and build model commissions for clients – mostly museums, though I like a bit of variety – around the UK.

I’m currently chair of my local LEGO User Group, Brick Alley, too. It’s great fun – plenty of chance to talk to AFOLs from all walks of life.

Let’s start these easy! What is your favourite LEGO theme?

That’s not an easy question! I’ve always loved LEGO City (or Town, or World City) since discovering LEGO as a 4/5 year old. Not least because those themes tend to contain LEGO trains, which is what I primarily build for.

I co-founded LNUR (LEGO Northern UK Railway) around a year ago with a group of adult LEGO train fans (we’re a cool bunch, ahem!), with the aim of getting AFOLs who were really in to LEGO trains to work together to to build huge, impressive LEGO railway displays along the lines of the great LEGO Train Clubs in the US and elsewhere (PennLUG, TBBR, and Victoria L-Gauge are my particular heroes on that front!). I’m not much of a loco builder, though – I tend to focus on the landscape and infrastructure.

I’ve recently started collecting the older Indiana Jones LEGO sets and the Lone Ranger sets – not sure what it is about those, but I really love the sets and character design.

Which is your favourite ever MOC?

This is a hard question! I blame myself for including it in my AFOL interviews since forever…

One of the first things I built as an AFOL was my Newcastle Central Station LEGO model, which still sits in my LEGO city to this day (here it is photographed at Bricktastic LEGO show in Manchester in 2015), and that holds a lot of fond memories.

My building styles and techniques have come on a lot since I built that, though, so a more recent favourite is probably my LEGO city museum pictured below:

This year’s favourite is definitely the 6ft railway bridge and valley beneath it (article header image), built for LNUR displays earlier this year.

The valley in particular really pushed my LEGO building in terms of size and techniques – I knew I wanted slope sides alongside the bridge, and coming up with a solution to building those in a way that was easily transportable was trying at times!

I expected it to take me a long time to build, but I managed to push through the majority of the model in around a month of my spare time.

What’s your most unlikely source of inspiration?

I love infrastructure – the “boring” stuff in life. That motorway junction; the way a railway bridge is constructed at an angle from an embankment. I get a lot of joy from trying to recreate the real world in LEGO: the awkward angles and strange patterns. If you look at the world in a certain way, you see those weird angles. It’s almost like the Matrix – I see the world built in LEGO bricks.

Unlike many other LEGO builders I think I work mostly in muted, neutral colours. I find these reflect the real world more closely. For example, I very rarely use black and white elements in most builds, as these are quite stark: dark greys are more suited to this.

Where do you build?

I’m lucky enough to have a LEGO room dedicated to my collection (Gillian might say “obsession”), and build a lot of my personal models there on the table space left by an ever-sprawling LEGO City, Amchester.

If I go away (which tends to happen quite often for the LEGO workshops I run), I tend to take a LEGO set with me with to build in the hotel room.

I have bowls of LEGO bricks in the office too – I enjoy just sticking bricks together while I think about solutions to a particular model or design issue I’m having.

What’s your next planned model?

Too many to list! The one I’ve achieved most with so far is a small railway display (of course!), which I’m hoping will be ready by mid February 2019 (famous last words!).

What is your favourite LEGO show to attend in the UK?

I’ve managed to rack up 10 shows this year, and every LEGO show has its own style. A few of my favourites are:

Mowbray Bricks is definitely up there – it’s a small show in a school sports hall in Yorkshire, in aid of the school itself – but the social element is spot on – we have a barbecue, a raffle, a quiz and a few beers on the Saturday night – as it’s held in June the weather’s usually nice enough to be able to sit under the marquee, too. Makes for a great weekend!

Bricktastic is on my shortlist too – a good excuse to have a weekend in Manchester, but Kev and the Fairy Bricks team do a great job of bringing in awe-inspiring LEGO models from around the world each year.

Shildon Brick Show – this is a bit of a cheat as it’s my “home” show and I’ve organised it alongside LUG members, but it’s been great to see it grow in terms of the content over the past 3 years, and as a train fan I love displaying in a train museum with my models alongside the real thing!

How did you get in to LEGO model commissions?

Someone asked me! This website (bricksmcgee.com) started as a LEGO blog 6 years ago as an outlet for my LEGO hobby, and has evolved in to so much more.

I’ve always loved LEGO, and a lot of the work I do now is LEGO workshops for adults and kids, and LEGO model commissions for museums, businesses and others. Mostly museums, though; I’m an absolute museum nerd – I love spending my days off getting lost in labyrinthine museums, and it’s great to see LEGO bricks acting as a tool to encourage kids (and adults) in to museums. That is my job satisfaction!

I now also run a monthly adult social in Newcastle called Bricks + Beers, which gets adults playing with LEGO bricks over a few beers at the brilliant Arch2 here in Newcastle.

I love the new LEGO wheelchair element. About time! (Though there was a brick-built wheelchair in the 1970s). It may just be one LEGO element, but introducing this sort of diversity in to LEGO sets at an early age is a fantastic catalyst to start talking about disability and people who are different from yourself.

A huge shame it doesn’t fit through standard LEGO door elements, but perhaps that’s a comment on accessibility in 2018! 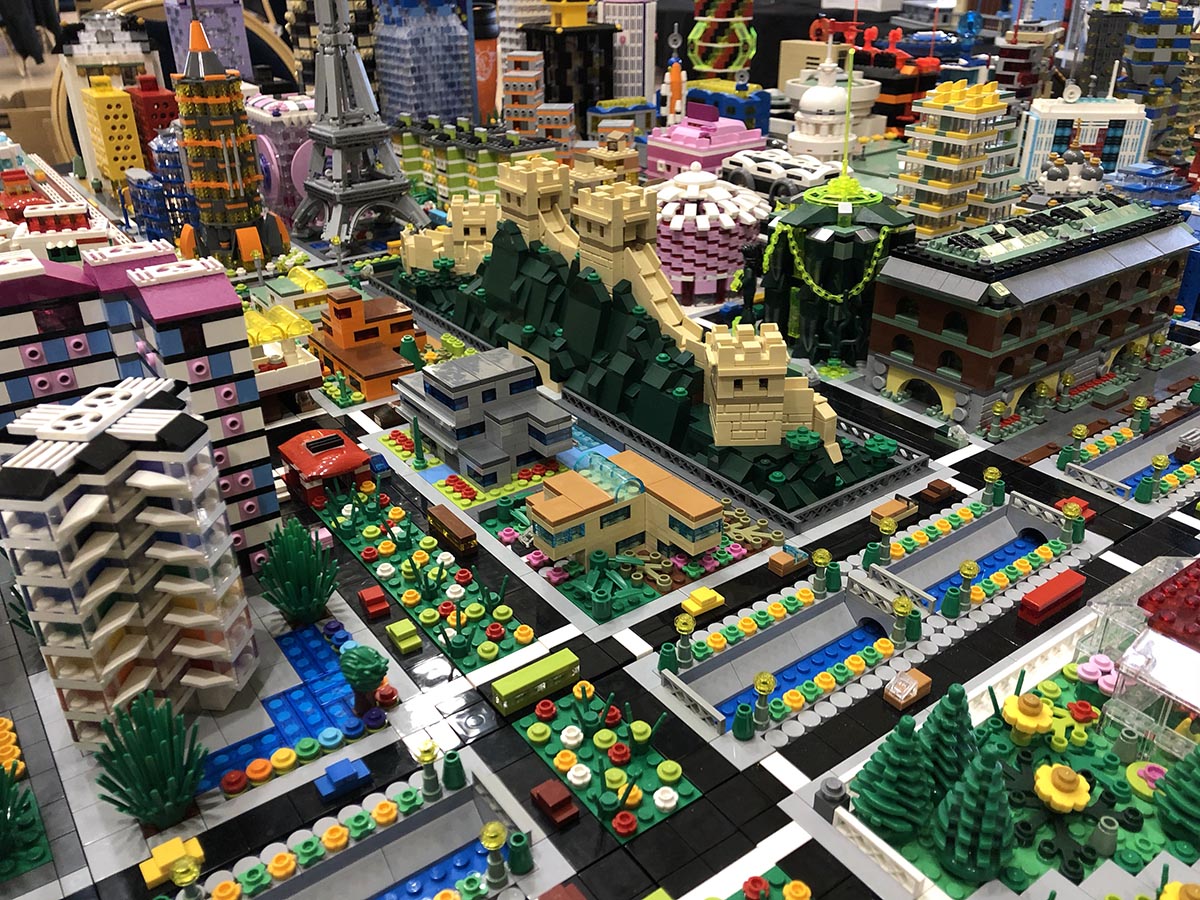 Which LEGO builders do you admire?

There are so many LEGO builders I admire: