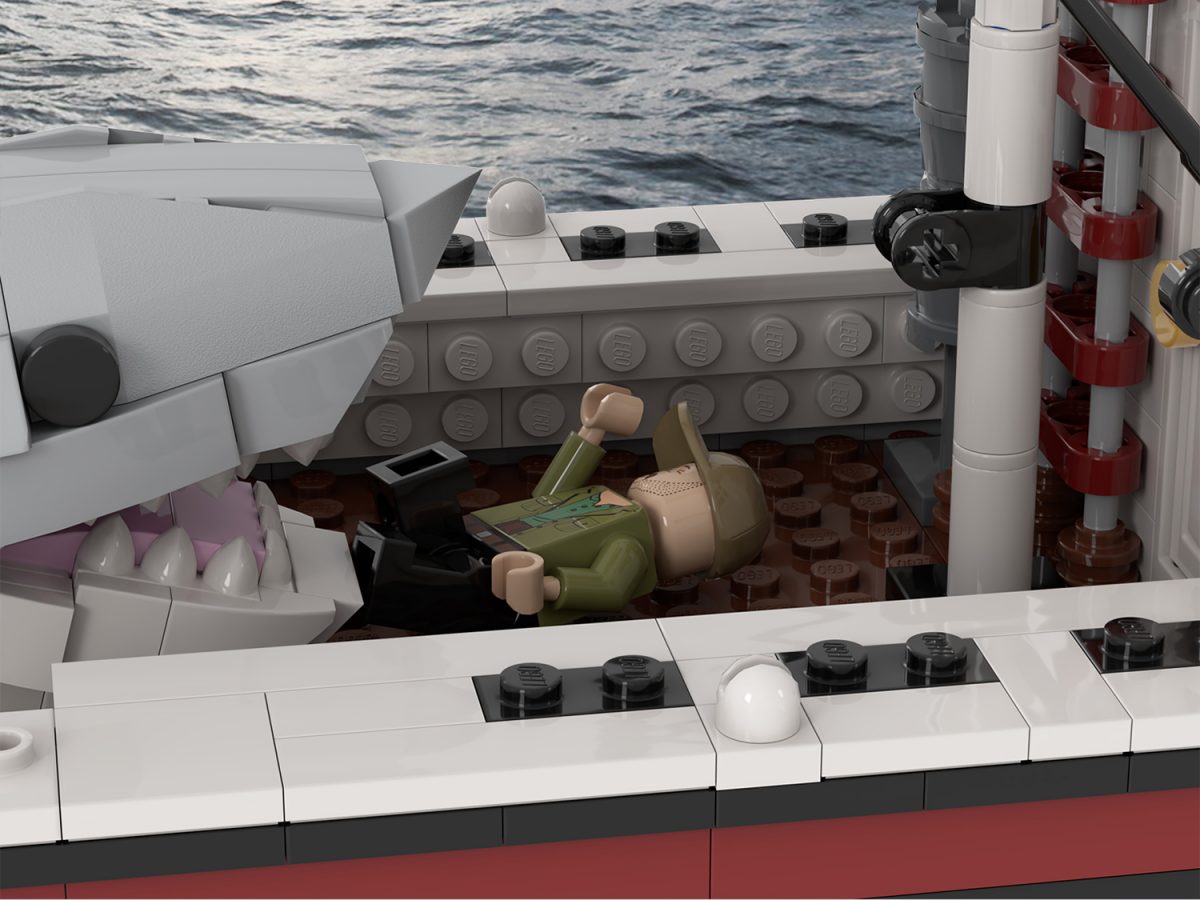 Uh-oh! A shot from Paul's LEGO model of the Orca

Paul, aka “Lego Pan Brickworx”, is a LEGO fan based in Ontario, Canada.

Like many adult LEGO fans, Paul had a dark ages during his high school years, and finally got back in to LEGO building thanks to his daughter.

And, as you’ll see, he has a rather excellent LEGO set for fans of the Jaws film currently up on LEGO Ideas!

“That’s a bit of a back and forth story: I got my first LEGO sets when I was 5 or 6. I’m 35 now so it’s been a while to remember which ones exactly but I loved the castle and technic sets when I was young. I had 3 older cousins that were all into LEGO when I was that age and I remember going to visit them and always trying to play with their LEGO which was awesome early on because they showed me so many techniques and cool MOCs that they had designed. I started to ask for LEGO sets for Christmas and birthdays and started collecting a fair size tote full over the years.

During high-school I lost interest a bit and packed them away.

It wasn’t until I had my daughter that I thought about buying her some of the new Friends and Disney sets that I got back into it a bit. My daughter and I would build them together when I had her on weekends after I was divorced.

My girlfriend started to join in with us and we began to really get into lego as a family. We started collecting our favorite sets and themes and began making friends with other AFOLs and LEGO retailers. We now have several shelves of LEGO sets displayed at home. ”

I wonder how many adults have got back in to the LEGO hobby because of their children!

“My favorite set so far has been Dom’s Dodge Charger. I’m a big fan of Technic sets and that has been the biggest one so far but I got the Land Rover Defender recently but haven’t had the time to put it together yet. I have a feeling that will be my new top set once I get it built.”

There’s definitely a strong following in the AFOL community for larger car models – whether Technic or Creator style.

If you could bring back an old LEGO theme, which would you pick?

“The old castle sets and Robin Hood style sets. They were my favorite as a kid but I have seen so many great sets with amazing greebled walls that I think would be awesome to see as sets in the future. The Old Fishing Store and other sets that use greebled walls and roofs make for amazingly detailed display sets and I would love to see that style in a castle set! ”

LEGO Castle is an enduring answer for this question – I loved it as a child, too. There are some brilliant castle-themed models on LEGO Ideas at the moment – I really love this one in particular as it’s packed with details and some great play features. And, of course, LEGO Ideas has recently announced the upcoming LEGO blacksmith set.

Which LEGO set do you think you’ll buy next?

“My current bucket list set is the Bugatti or Lamborghini Technic sets because I love the detailed Technic sets, but it is more likely that I will get another Harry Potter set as that is the largest part of our current collection.”

Are you a member of a LEGO User Group? If so, which one, and do you find it useful to be in a group with other LEGO fans? 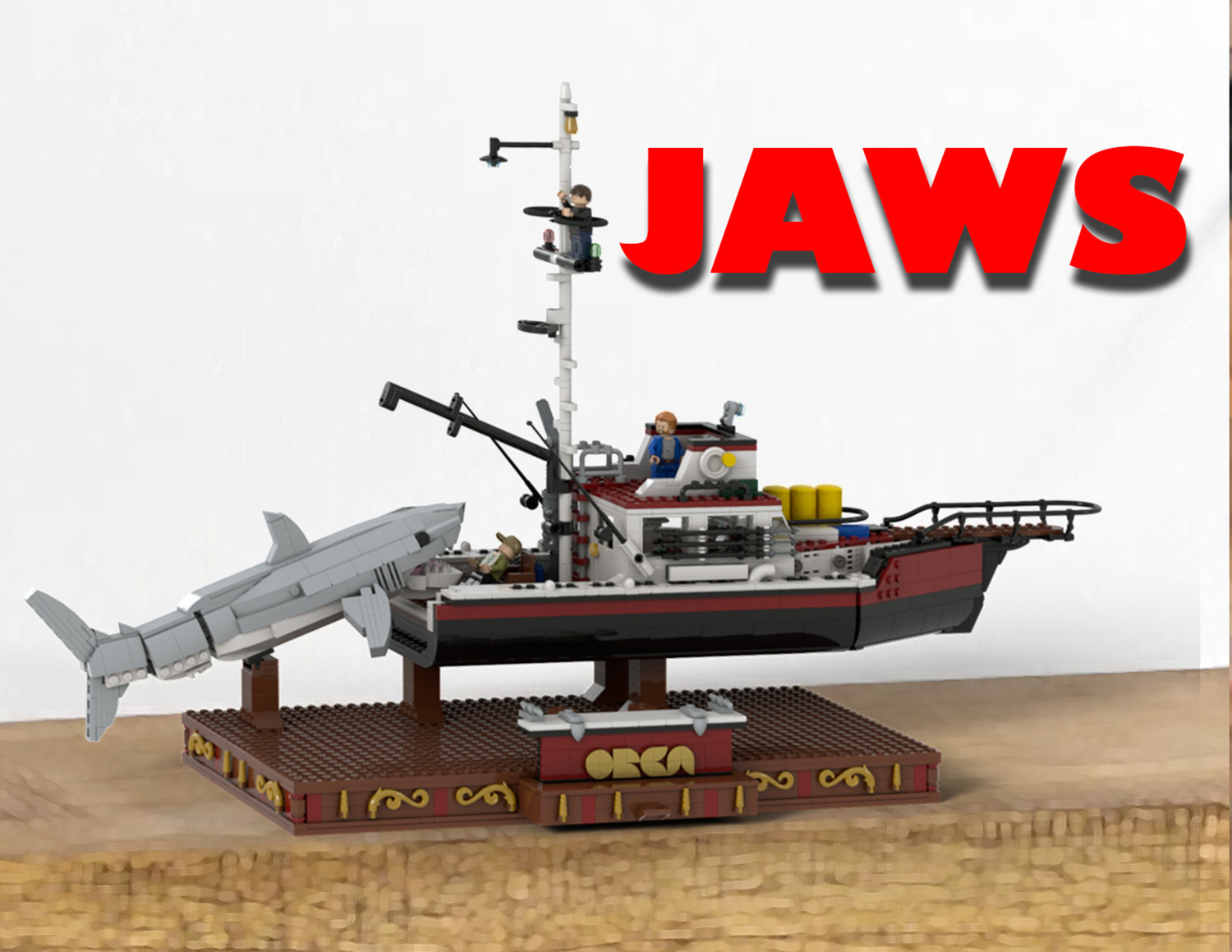 “I’m part of several LEGO groups on Facebook and am on Instagram as @legopanbrickworx, but not an official in-person LUG.

I have a few people that I do spend a lot of time talking to and visiting that are LEGO retailers and builders however. We deal quite often with a store in Grimsby Ontario called The Brick Shack. Jaimie, the owner, has helped us a lot over the last year or so with finding sets and parts we needed to build our designs and he has introduced us to a lot of his regulars that run Bricklink stores and design MOCs as well.”

It’s nice to have a dedicated, independent LEGO store nearby. They can become a hub for local AFOLs – and, in your case, inspire a LEGO model of the boat from Jaws!

Are there any other LEGO builders who inspire you?

“Boone [Langston]! Watching him and the other teams on LEGO Masters last year really got some creative energy flowing and got me thinking about making MOCs again.

I would be remiss not to say my cousin Guy: he was probably the most influential builder in my life. He is about 10 years older than I am so when I was 6 or 7, he was already in his mid teens but he took the time to build and play with me and showed me some of the Technic designs he built. I still remember him building a red pickup truck with a working engine and full transmission with a shift lever in the center console! That is what I think got me so hooked on technic sets but with a very brick-built body style. I want to start working on that style again in the future.” 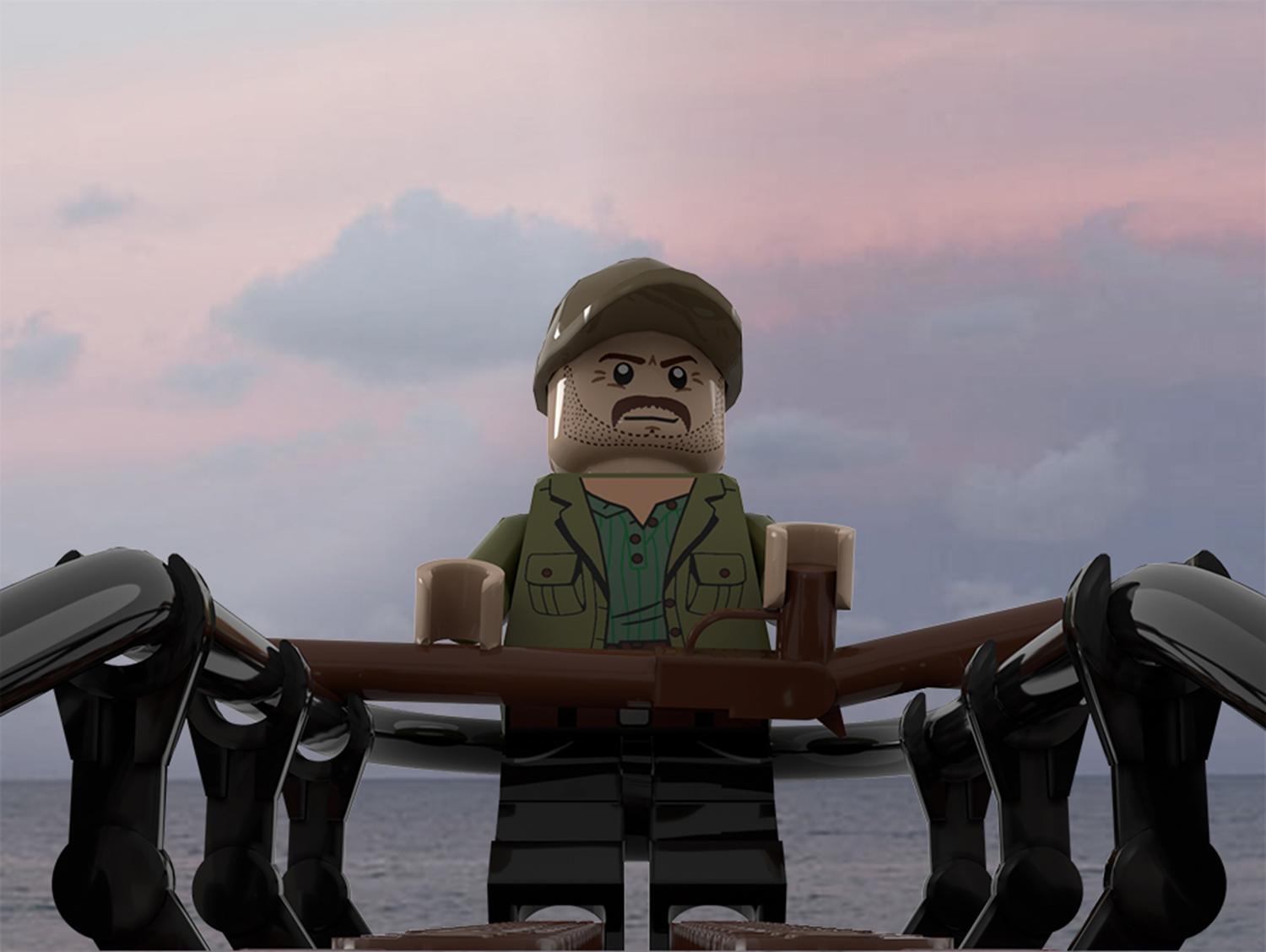 “It started with a conversation between my girlfriend and the owner of our local LEGO retailer at The Brick Shack. They were discussing their favorite movie being Jaws, but sadly LEGO had never designed a Jaws themed set.

I went to college for 3D design and I had dabbled in LEGO Studio a little before that so I thought I would give making a Jaws LEGO set a shot! I started working on the design about a year ago and worked on it here and there in my spare time. With a full time job and family responsibilities, it took a while. I started with the Orca, then made the Shark but I wanted to make it a little more adult oriented for us to display like a collectors item, so I designed a base for it to stand on.

While I was nearing the completion of the original design, I found out about Lego Ideas and started to get excited to submit it when it was completed because I thought an official LEGO Jaws set would be amazing and very well received… Sadly, when I finally finished it and tried to submit it to Lego, it was denied.

LEGO had decided that Jaws was not an appropriate intellectual property for the Ideas line. I was crushed because I had worked so hard and so long on it.

My girlfriend and I decided that we would at least build one for ourselves so I made a few changes so that all of the parts were currently available parts that we could buy online from Bricklink or LEGO directly and set about ordering all of them a few at a time. It took a few months to get them all and I am still missing 4 parts that are currently in the mail.

While we were waiting for the parts to get here, LEGO posted a vote for the 150th Brickheadz design and one of the options was Jaws! So of course I voted for it and thought nothing more about it but a friend from work who had seen my progress in the design had messaged me to ask if my set was on Lego Ideas yet because he had seen a Jaws themed set on it that morning!

I immediately jumped on my computer when I got home and began the submission process and sure enough, Jaws was now an acceptable IP!

That is where we stand now. I currently have just over 1000 support votes on my set at the time of this writing after only 8 days (at the original time of writing) but I need to hit 10000 to be reviewed by LEGO!”

If you’re a Jaws fan, you can support the project on LEGO Ideas here.