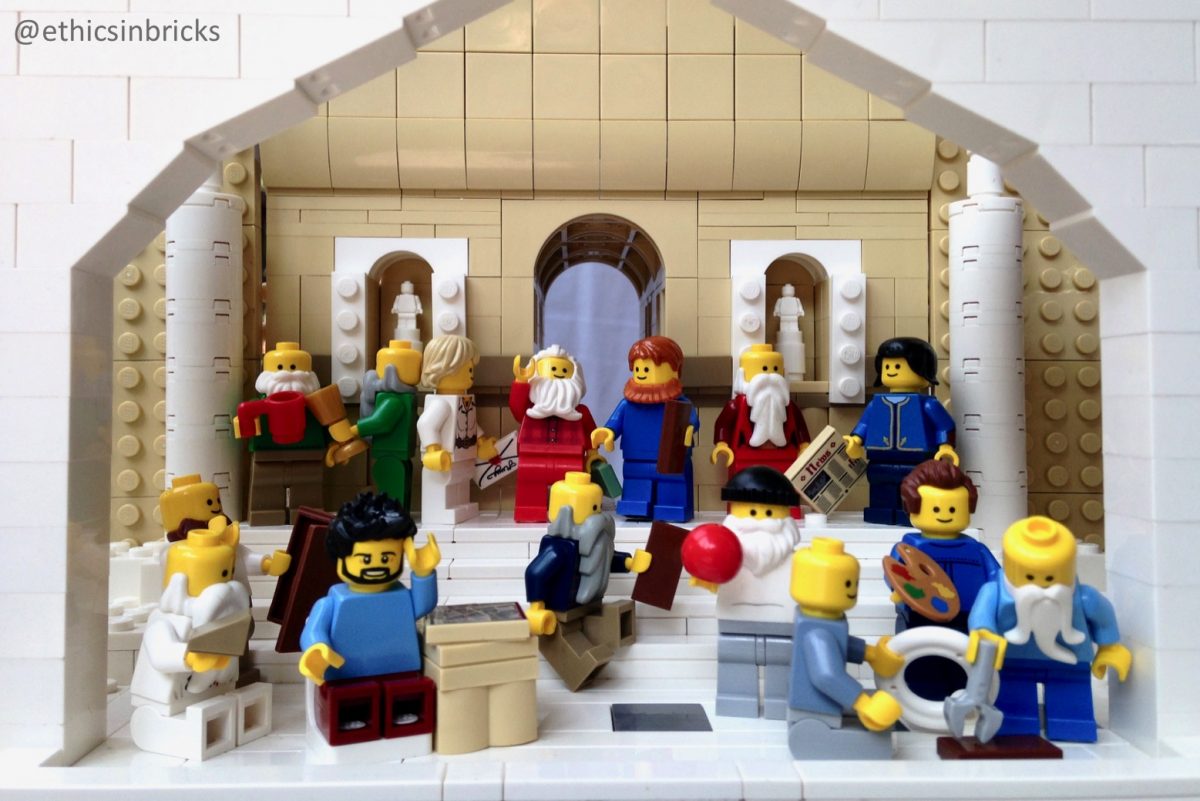 As with many AFOL interviewees, I came across Ethics In Bricks on Twitter. I love his LEGO interpretations of ethical dilemmas and concepts!

Whilst he prefers to remain anonymous,  he is an ethics teacher at a university in Spain.

What is it you do with LEGO bricks?

“I share pictures with LEGO creations via social media, with an ‘ethical’ or a ‘philosophical’ twist to them. I teach and research ethics-related topics, and I thought it would be fun to spice up my PowerPoint presentations with some original material.

I started making the pictures for myself and then I decided to share them online so that other (ethics) teachers also could use them. After a while the number of followers of the Facebook and Twitter pages grew and “Ethics in Bricks” became something in its own right.

Nowadays, I share philosophical quotes, newspaper articles, videos and other thoughts via the @ethicsinbricks social media accounts, always accompanied by one of my creations using LEGO bricks and minifigures. So far, people seem to appreciate it; after a bit more than one year, there are about 12,500 followers of my accounts on Twitter, Facebook and Instagram.”

I love the use of LEGO to illustrate quotes and concepts in this way, and they provide a nice resource for other ethics lecturers too!

“To be honest, I don’t really own a lot of “real” LEGO sets. I only started building one and a half year ago (again, after my childhood quite some years ago) when I bought the Lego Architecture Studio (21050), which is arguably not really a “set” (it’s a box with about 1200 pieces, mostly white, without a building instruction because it encourages ‘original’ creations).

I liked the little book on architecture and some discussions of techniques that came with the set and tried to build some famous buildings I knew, using the white pieces that came with the set. After a while I ordered a load of additional (colorful) pieces and minifigures via Bricklink.com to be able to build the @ethicsinbricks creations that would involve more colour and minifigures.”

A true MOCer; one who isn’t too interested in sets, but the blocks themselves! 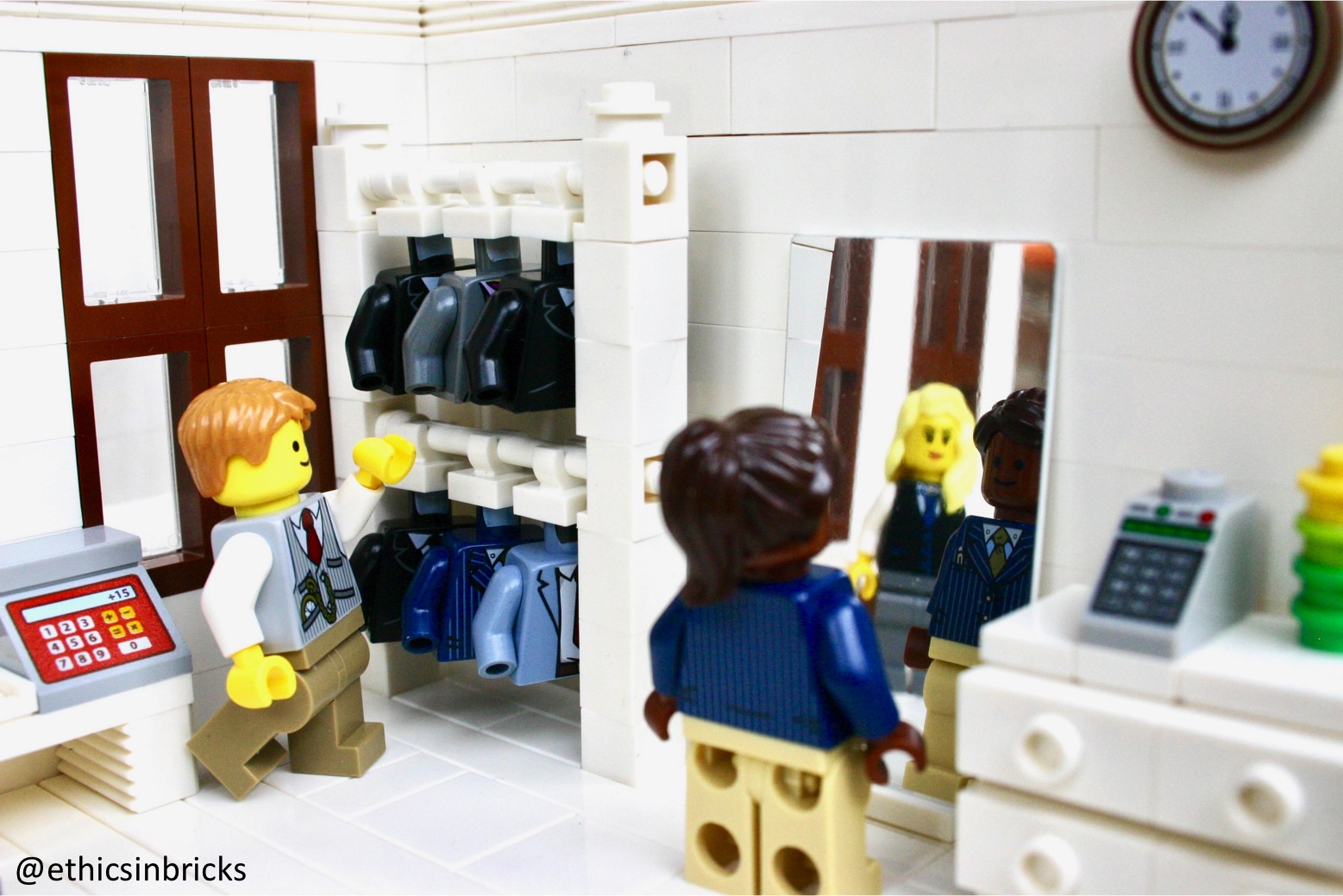 What is the best MOC you’ve built so far?

“The MOC that received most attention online is probably the ‘School of Athens’, which was also shared by some ‘famous’ philosophy accounts and published in an Italian newspaper.

It’s basically a simplified LEGO version of the original fresco by Raphael, but I also added some more recent (female) philosophers to it. It took me some time to order all the necessary minifigure beards online, but I was happy with the result. And, some promotion, the picture of the LEGO School of Athens is also on the front of the 2019 Ethics in Bricks calendar.

Furthermore, I was also happy with my ‘suit rack’ in a suit shop, which I built to generate attention for the work conditions in which clothes are produced.”

Ah, AFOL problems: trying to find the right beards! There’s certainly a large range of parts for beards these days. 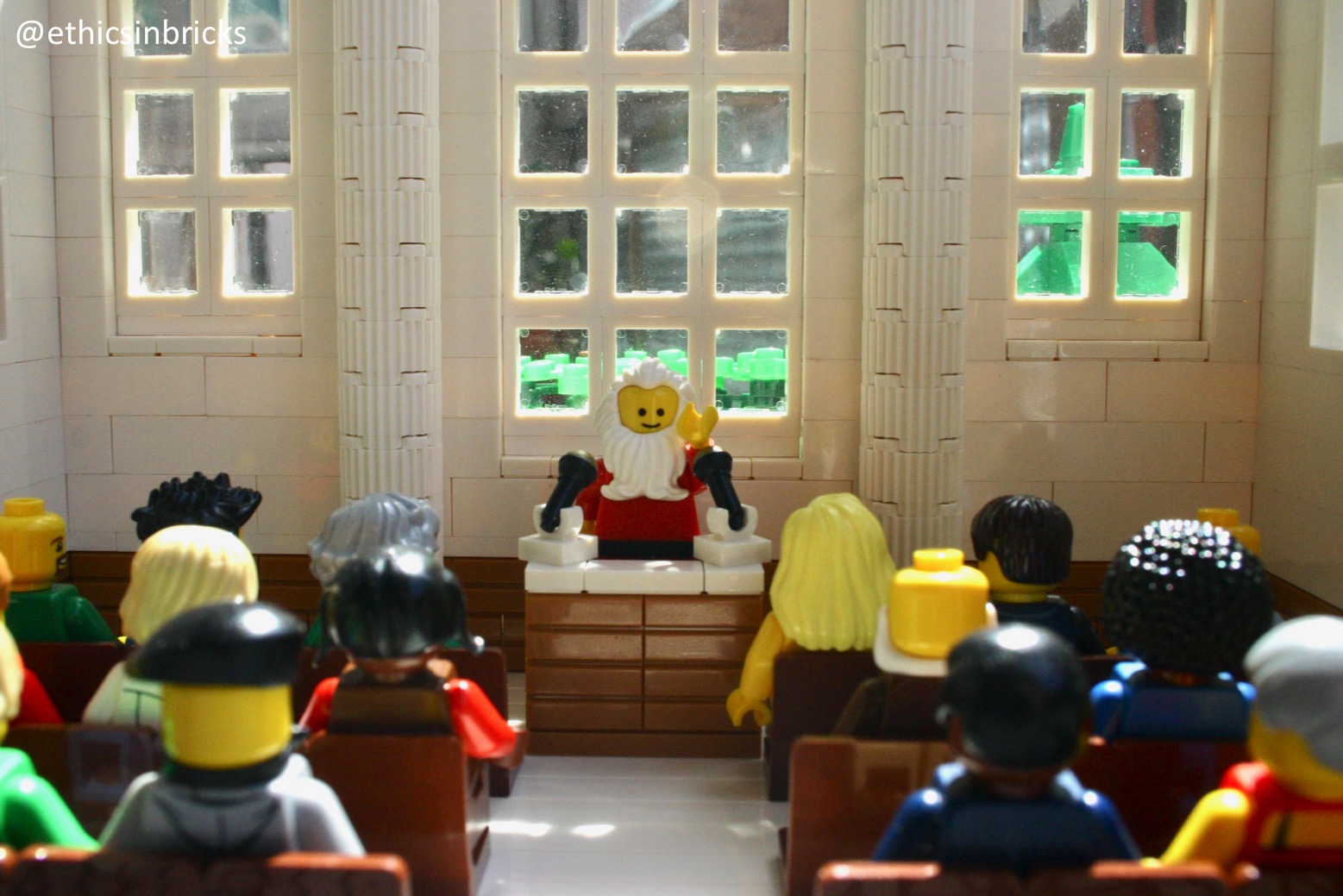 What is your favourite LEGO element?

“I really like the mirror piece (20193), because it allows playing around a bit with angles, and it can create a very ‘real’ feel of a space. Furthermore, I was quite happy with the “Karl Marx beard” (here) and the “Immanuel Kant hairpiece” (here).”

I remember getting the mirror element in the Detective’s Office modular(New Elementary review of the set, including overview of the mirror piece), and loving it. In many ways, it seems odd that LEGO hadn’t really done that before, bar stickers on top of bricks. 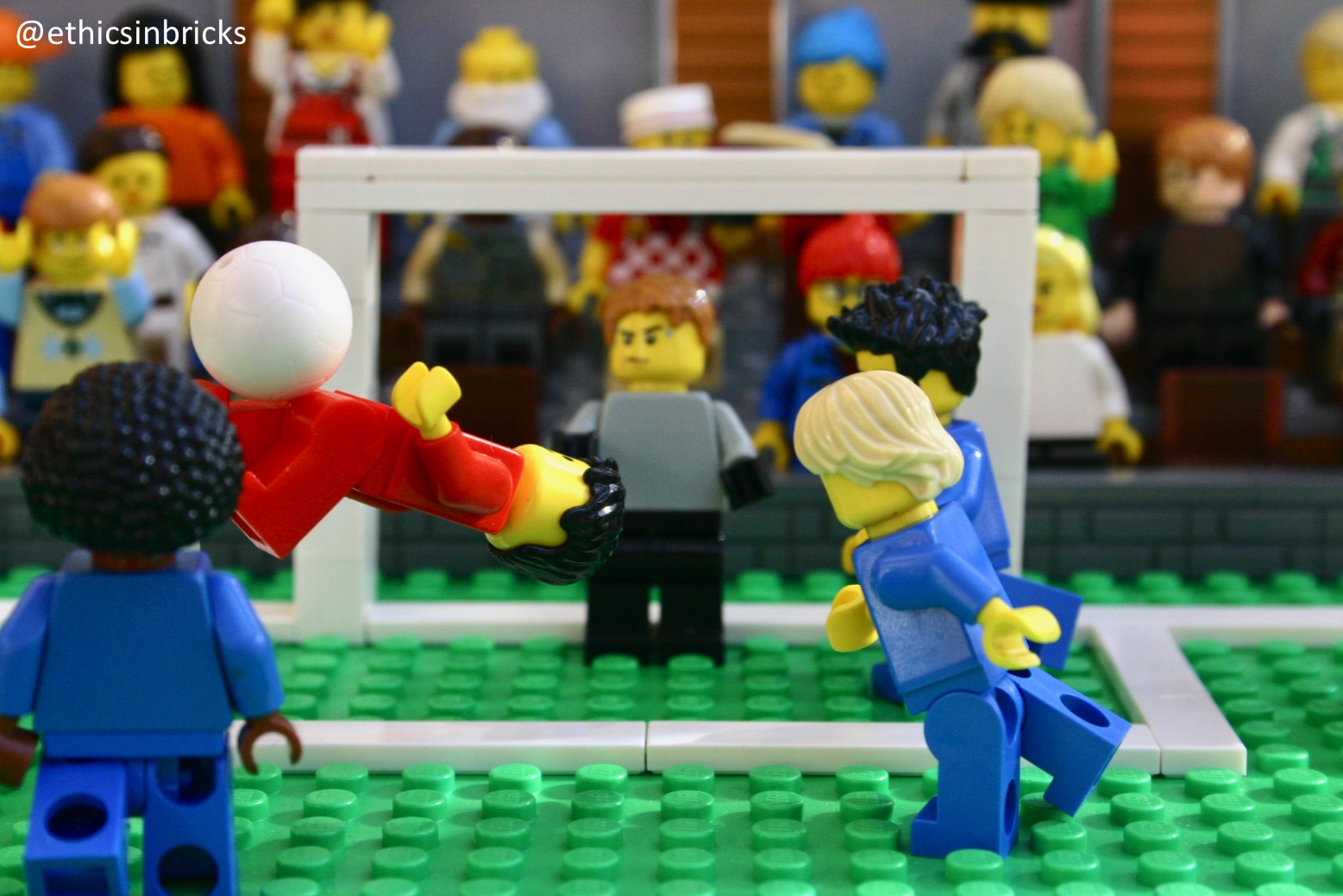 What is your most unlikely source of inspiration for a LEGO model?

“I think that, generally speaking, I get the best ideas for LEGO models when reading books on philosophy, reading newspaper articles or preparing my classes. I recently discussed, for instance, the communist manifesto in class, and I almost simultaneously found out about Amazon’s mission, which then resulted in a mixture of critique on a capitalist business agenda, using a quote from Marx and Engels (see the original post here).”

“I just built a very large lecture hall because I would like to share some thoughts on the ethics of education soon. Follow @ethicsinbricks to see the pictures appear online soon.”

Oooh, nothing like a teaser for future models as a cliffhanger end to an AFOL interview! Thanks for taking part, Ethics In Bricks.