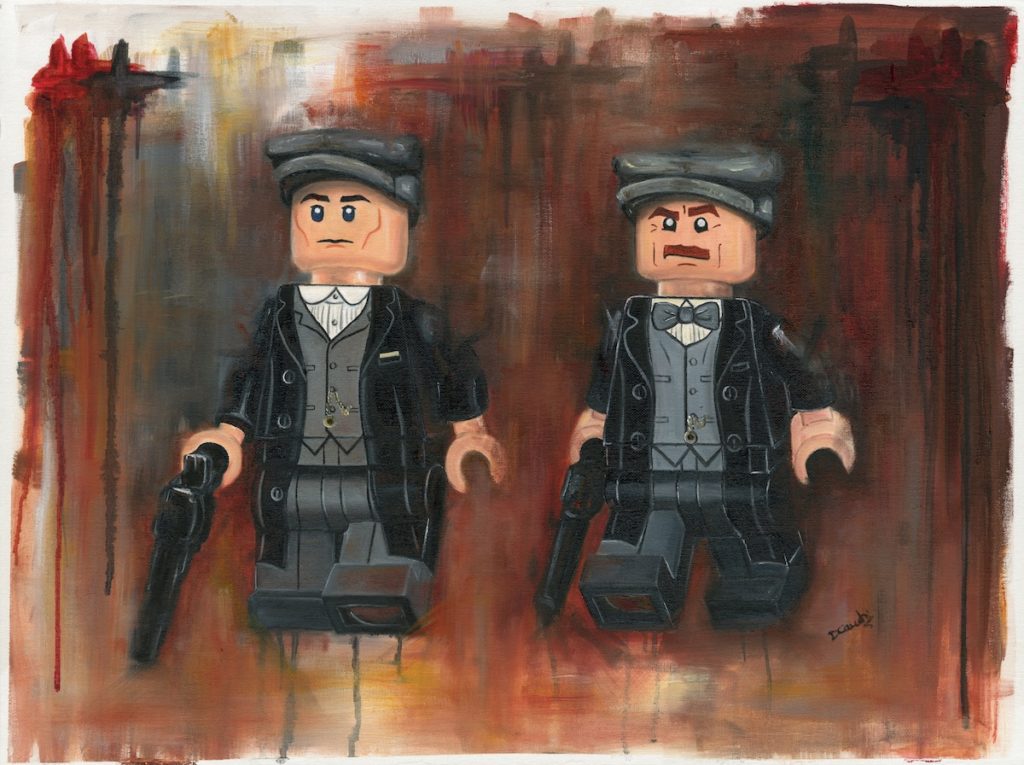 I came across Deborah Cauchi with her trade stalls at LEGO shows around the UK. She’s an artist who specialises in LEGO under the alias Toys R Art.

She’s based in Sunderland the North East of England, near to me, so our paths keep crossing. I’ve finally got her to do an AFOL interview – so this one is a little different to previous interviews; enjoy!

You’re not a normal LEGO builder! Can you explain what you do?

“I’m definitely not a normal Lego builder although I do build and my house is full of LEGO. I am actually a figurative artist who has a “healthy” obsession with the minifigure. I take this humble figure and I give it a moment in the spotlight in the form of an oil painting. In doing this I turn what is essentially a small, sometimes forgotten about object, into a work of art.”

Ah yes. I too have a “healthy” obsession with LEGO collecting 😉

I have a quite a bit of your art in various forms – mugs, coasters, prints – and I love them all. They capture the figure designs so well, and provide that little bit of extra life to them. 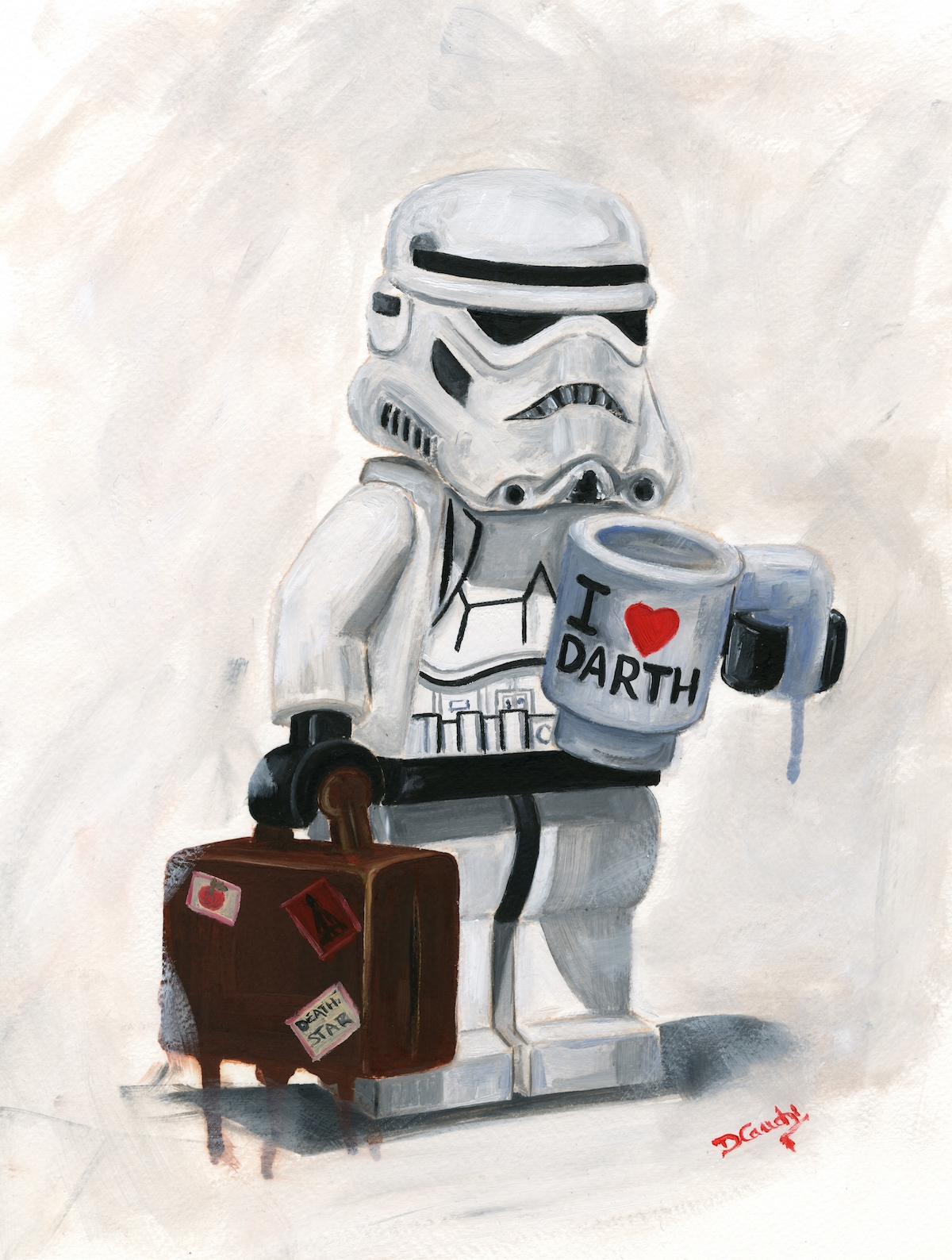 What’s your favourite piece so far?

“To choose my favourite piece is quite hard as my style has changed over the last few years. Probably the one that I will always love is my “I Love Darth” painting from a few years ago as It was and still is my best seller. However along with that one I’d have to go for my “Peaky Blinders” one as it was an experimental painting in terms of the way I usually work.”

They’re both superb! And no wonder they’re popular – a great mix of LEGO and popular culture on both counts.

“Lego has always been a staple in my house as my two girls loved it growing up and as my husband is Star Wars Lego mad.  When I graduated from Sunderland University 9 years ago with a BA in fine art I painted a series of retro toy paintings which included a couple of LEGO minifigure ones. These sold immediately and the “then hobby” took on a life of its own. It’s now my fulltime, 7 days a week job and we have a house full of Lego. I mean it’s taken over every room in the house!”

You say LEGO has taken over like it’s a bad thing! You always seem to be busy with commission requests and painting new artwork for shows – a good excuse to have lots of LEGO laying around.

What do you take inspiration from when deciding which LEGO figures or themes to deal with?

“Deciding which figure or theme is sometimes generated by what’s popular at the time. If a new Star Wars movie is coming out later that year or a Superhero one is on at the cinema then I make sure I’ve covered those as I know that’s what people will be looking for at my next event. Other times it’s really my own inspiration, my studio walls are covered in minifigures and being surrounded by them helps with ideas. I do also take public requests into account and if more than 3 people ask for a certain figure I tend to paint it knowing there is a market for it.” 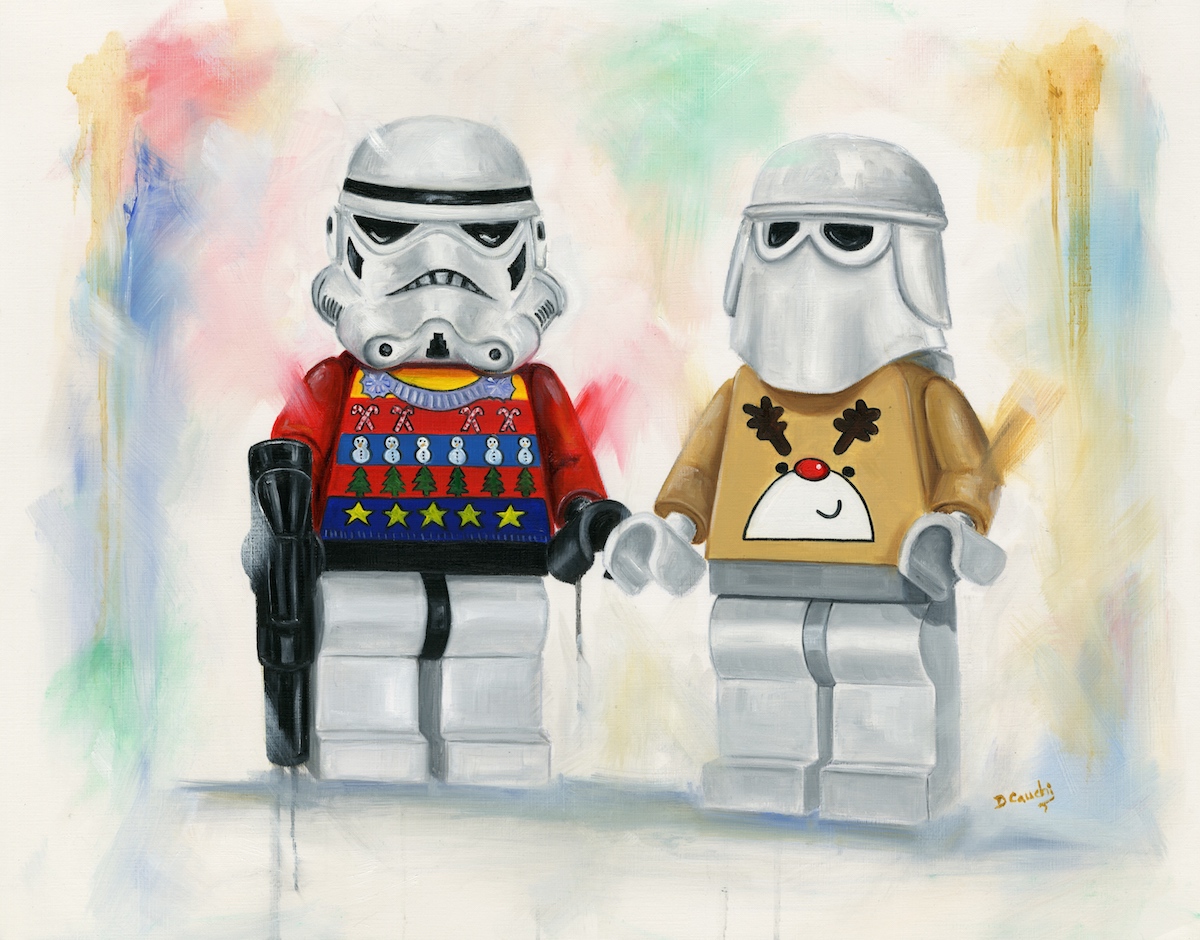 Do you have a favourite LEGO theme? Why do you love it?

“My favourite theme has got to be my Stormtroopers, who doesn’t love a quirky Trooper? I love manipulating them and putting them into everyday situations, like my “Christmas Jumper day at work” or the “Party Trooper.”

“I enjoy seeing peoples’ reactions when they see them. It’s usually a big smile or a laugh out loud. Art should create some kind of reaction from the viewer and I like that mine makes people smile (most of the time, anyway!).”

You attend a lot of LEGO shows! Which is your favourite to attend each year in the U.K.?

“My favourite has to be Bricktastic for a few reasons: the AFOL makers come from all over the world and the MOCS are just so amazing. We get to meet up with so many friends from the LEGO community and it’s just so nice to catch up with them. It isn’t the busiest in terms of trading for me but I talk to so many families who really enjoy what the event has to offer and the fact that it is for the Fairy Bricks charity just caps it off.

Shildon is definitely my 2nd as it’s my local one, meaning we can go home in the evenings instead of a hotel and it is so lovely to have one in the North East. We are certainly starved of events like this “up North” and it’s an extremely busy one which is always good for us traders.”

Bricktastic is a fantastic show – Kev does a great job of securing some of the best LEGO builders in the UK and from abroad to display, which leads to a really impressive display. Worth going along if you can!

Thanks for the Shildon mention, I was about to say! [I help organise the Shildon show alongside my Brick Alley LEGO User Group colleages]. I think many visitors to Shildon are surprised someone so local has such a niche job – you’re certainly one of our most popular and unusual stalls at LEGO shows! 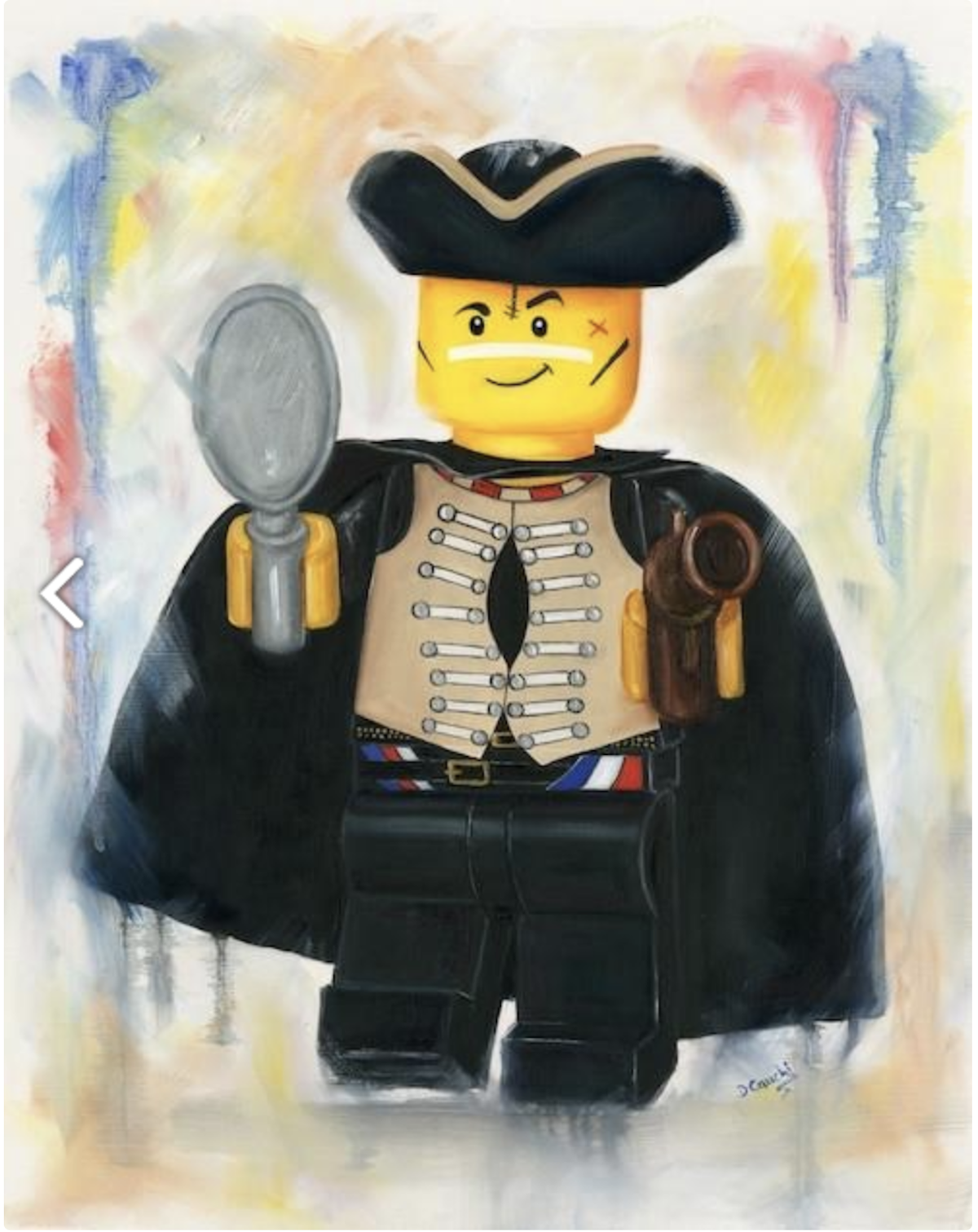 What’s the strangest request you’ve had for a LEGO portrait commission?

“Over the years, I have had some strange and funny commission requests. I’ve had a wedding one where the bride and groom were obsessed with Back to the Future. The Groom wanted himself in Marty’s outfit and his bride to be as Jennifer with their 2yr old soon as Dr Brown with the DeLorean in the background.”

“The funniest one would have to be a husband commissioning one of his new bride in her wedding dress but in the arms of Chewbacca as she was obsessed with the furry guy. My favourite two was an Adam Ant fan who wanted a Prince Charming one and also a couple who’s nick names were Bunny and the cockney builder, hence a Bunny girl and her Pearly king. These days nothing surprises me.”

What an eclectic mix. I’m disappointed (or perhaps relieved!) there weren’t any really kinky commissions – perhaps that’s next!

There’s definitely something compelling about the mix of LEGO figures, popular culture, and art. And LEGO fans are weird (I should know, I am one and I’m weird!).

Who else inspires you in the LEGO community?

“I love to see the MOCs that AFOLs come up with, their imagination is just of the charts. I recently saw a fabulous Wacky Races collection at Bricktastic [by Martin Redfern] which has triggered my imagination (didn’t take the name of the AFOL though) and I love checking out Minifigs.me and Firestar Toys as they always have some new characters on the go.”

Those stalls are dangerous at shows – too easy to spend a fortune as there are so many great figures on offer. Martin is a very talented builder, and I love his Wacky Races collection (more photos of them are available in this Brothers Brick article from 2017). 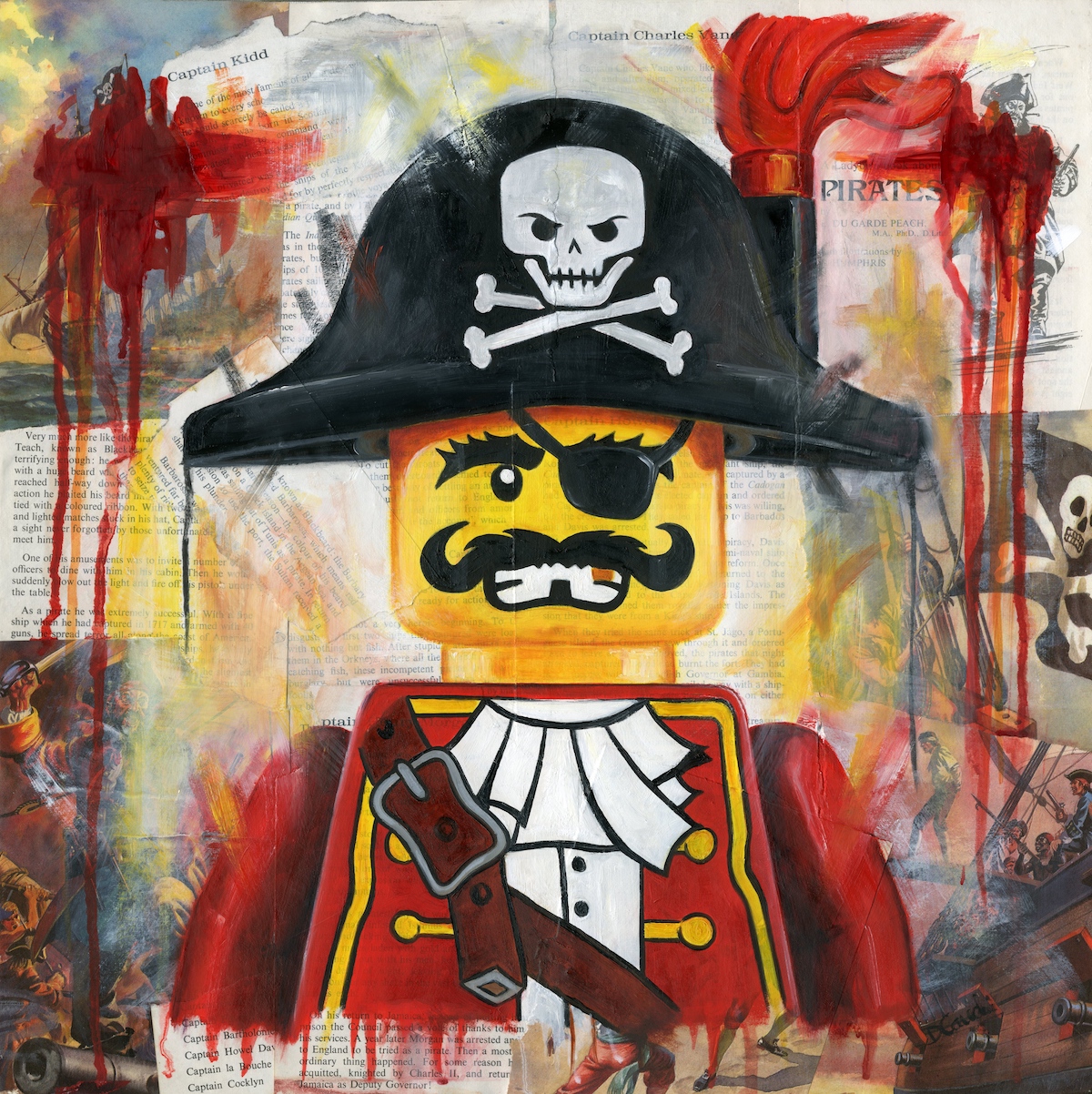 What are you working on next?

“Commissions have taken over slightly at the moment so my own work tends to have to fit in when I can but I have a few new ideas whirling round my head.”

On a more adult theme Game of Thrones and the Walking Dead are definitely in the pipeline.”

I can imagine anything Game of Thrones-related being very, very popular. Likewise with the Walking Dead – LEGO zombies are COOL! I really love the pirate portrait – I look forward to seeing what else arrives in this series. Many of the collectible minifigure series have some superb.

While we’re at it – my suggestion for a portrait is this guy from 60173 LEGO City Mountain Arrest: I love his boxer shorts with claw patterning! The figure designers must have been endlessly amused producing this one.