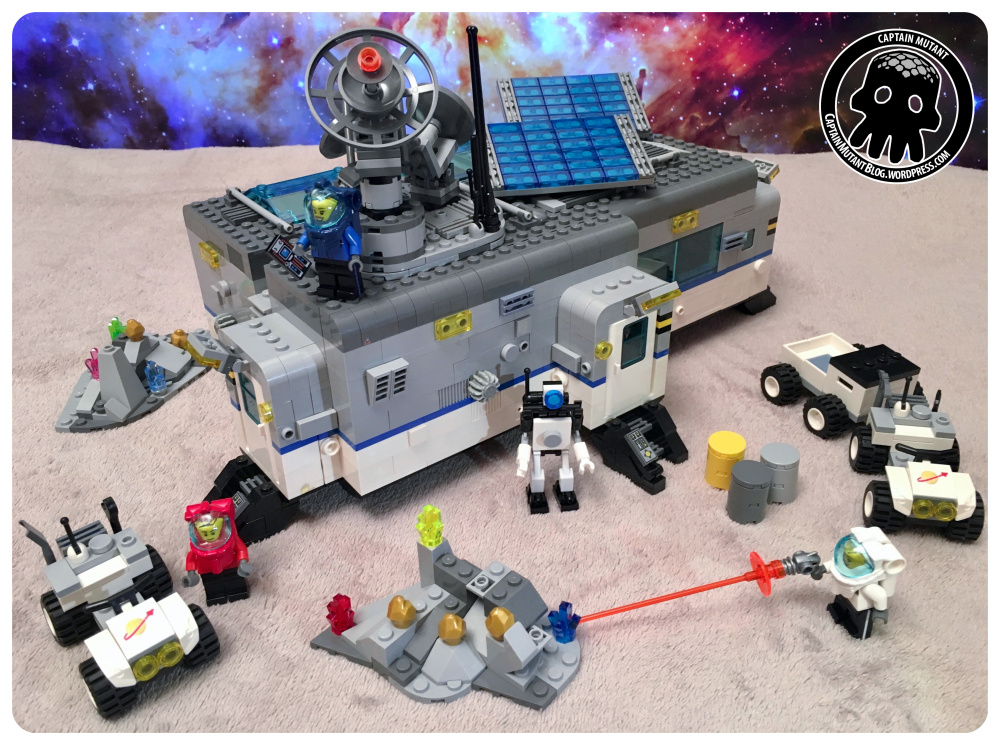 It’s time for another AFOL interview – this time with classic space fan Michael, aka Captain Mutant, who lives in Wales.

I came across Michael, like a lot of AFOLs, on Twitter. His Twitter account follows his design process and it’s been interesting to see the models develop over time, and promotes his LEGO Ideas set, Planetary Outpost. Planetary Outpost provides a refreshed look at a classic space base with a modular system of corridors and rooms, and some very cool features such as sliding doors. You can follow along on his Flickr account, too. “I’m a huge sci-fi fan so I really love the spaceships LEGO has produced. My favourites are the Space Shuttle Tydirium (75094), the Milano (76021), and Benny’s Spaceship Spaceship SPACESHIP! (70816) – but as a child of the 80s, there can only be one true favourite: set 928, the Classic Space Galaxy Explorer. It’s a truly iconic design, large, yet has few pieces and is easy to build, which means you can have many crash landings without worrying about having to spend hours rebuilding it. Plus it came with two base plates, including a lunar crater one (how can anyone not love those?), and there’s even a small control tower thrown it. This set has got it all.”

I really love the classic crater baseplates – really should add one to my collection! I think Benny’s Spaceship Spaceship SPACESHIP! really ignited passion for spaceships again, not just for AFOLs but KFOLs (Kid Fans Of LEGO). 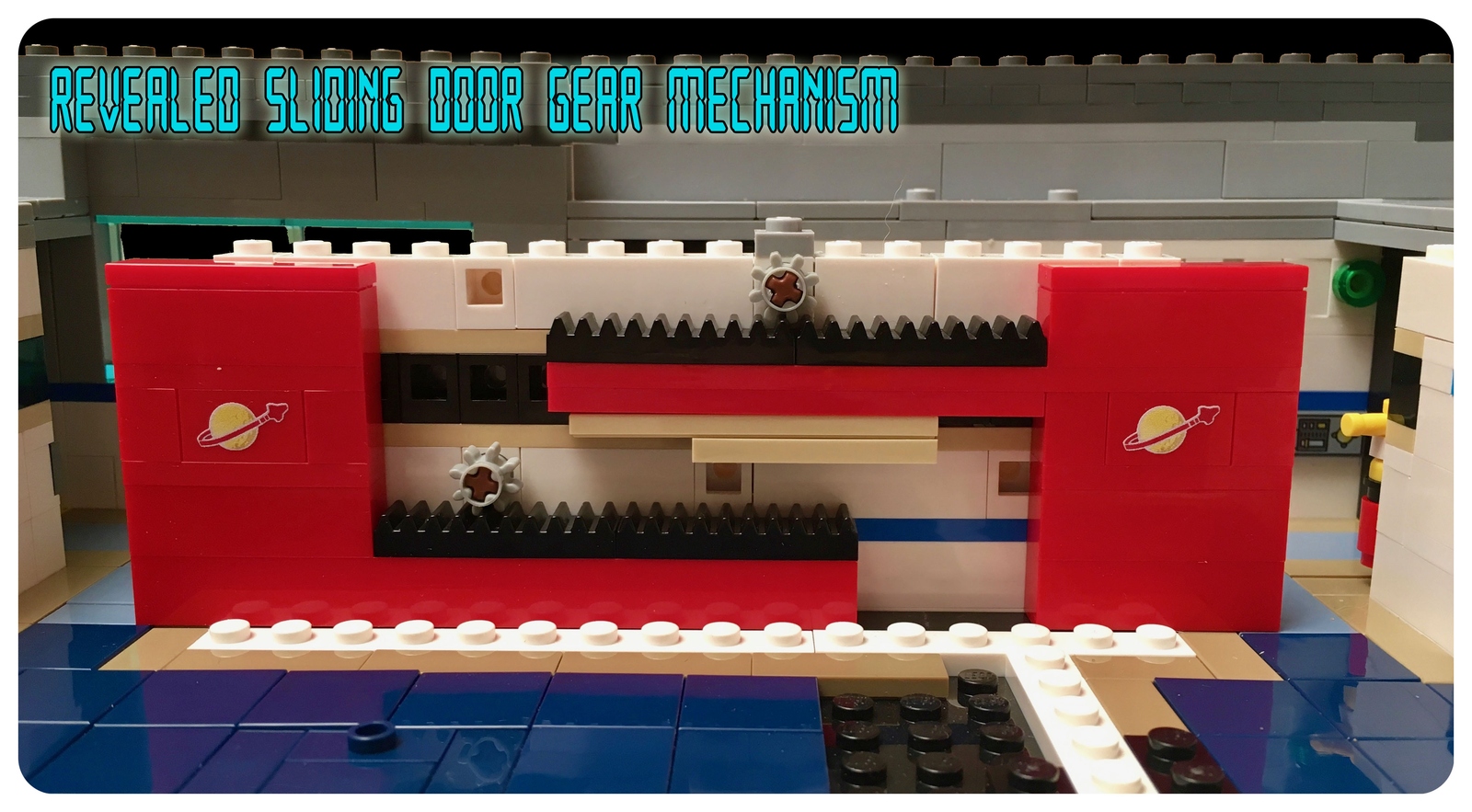 “I’m currently a one-trick pony and have only seriously built one MOC, my LEGO Ideas submission, Planetary Outpost. But what I lack in quantity, I believe I made up in a vast amount of detail and play features I crammed into my single creation ;)”

“But if I have to choose what is my favourite out of the whole set, it would have to be the robot ‘All Sorts’. He was an afterthought, a feeling that any sci-fi crew worth its salt has to have a robot companion. I struggled to create one that could be easily articulated and be minifig size. And I really like what I came up with.”

I really love the sliding doors built in to the model of Planetary Outpost (mechanism photographed above) – I can imagine LEGO designers adding similar play features if they were to re-release a classic space-inspired theme.

“I’ve spent the last two years first designing, and then redesigning Planetary Outpost, so I’m taking a break at the moment… although I do have an idea for an encore, and it’ll be another Classic Space MOC.” “Jamie Berard. He’s the first designer I got to know after I came out of the Dark Ages. I was amazed by his work on the Parisian Restaurant (10243), the level of detail he crammed in the architecture, and the complex internal decoration. It really showed me that there is no limit to what you can do with LEGO and this sent me on the path to creating Planetary Outpost and have the guts to expose my design to the world.”

“Matthew Ashton (Design Vice President at The LEGO Group), for his boundless enthusiasm and amazing positivity. He’s shown me that there’s nothing wrong with an adult being in love with little bits of plastic. The fact he commented on my project very early on certainly helped!”

I love Parisian Restaurant – one of my favourite modulars of all time and one of the few I bought another of! The roof was incredibly neatly designed, and as you say the interior was really nicely done too – I especially liked the curtains in the restaurant.

“I haven’t got one. I’m a big fan of all colours that are produced and I’m not afraid to dabble with spray painting should particular pieces not come in a particular colour! (I know that’s likely to be seen as heresy by some of your readers!)”

I can hear a lot of cringing and teeth-sucking from readers! Moving quickly on… 😉 “You’re going to say I’m boring because I’m only repeating what the other designers you’ve interviewed have said, but it has to be the Erling brick. I discovered it by chance because I needed to attach a printed tile to a wall and didn’t want it to protrude too much, so the Erling brick was perfect for that. Then, during my redesign, it took on a whole new life of its own as I dabbled with SNOT techniques. It’s a fantastic piece that you can attach other pieces to from so many different angles and as the connection points don’t protrude, they don’t interfere with other parts of the design. I didn’t know I could get so excited by a piece of plastic, but there you are. Colour me excited!”

It’s definitely not a boring pick – I think so many AFOLs pick it because (for me, at least) I had so many as part of LEGO City sets in the 1990s as a child, and when I came back to the LEGO hobby, they were used in much more clever ways – particularly in sets like Horizon Express.

“That’s a tricky one to answer. Since I’ve started building stuff without instructions, I’ve been looking around in real life for ideas (like the colours I used for the base’s fire extinguisher), and online for techniques (the Saturn V was a revelation as to what you can achieve with SNOT techniques)… and then I slowly moved away from other designs to see what I could come up with on my own.

“Which is why I like my redesign so much: the first design of the rooms was mostly based on other people’s ideas, but the redesign was all mine. Of course I’m not arrogant enough to think that my design is unique – how could it be? I’m so new to this, everything I’ve done must’ve been done by someone else at some point before – but the redesigns came out of my imagination, which made me quite excited as the result. I love the food processor and the bed, and I particularly like the toilet (which couldn’t exist without Erling!).”

“In fact, the toilet was actually inspired by the toilets where I used to work at the time, and I thought about how to recreate their nice underside curves… while sitting on one of them! :D”

The Saturn V definitely had some eye-opening SNOT techniques! One of the few space sets I own 😉

“Need you ask? Classic Space of course! Star Wars is great and all, but LEGO had a great thing going with its own sci-fi concepts. It’s a shame that’s all disappeared now.”

I had a feeling you’d say that! For many AFOLs it seems like an iconic theme, and some of the sets are definitely up there in LEGO’s best sets of all times.

“I have very little room to spare, so I do most of my modelling in my head and using LDD. It’s only once the design is finalised digitally that I then order the parts I need and build it in real life… and discover that there’s a huge difference between a virtual model and a real one, and things don’t work as I had expected (virtual apps don’t take gravity into account), and then comes the redesigning process! It’s all fun and games until you have to make room to feed the kids!”

I don’t use software like LDD or Bricklink’s Stud.io very often for that reason (plus, I spend enough time looking at screens as it is for work!) – and sometimes, finding an element by accident and playing around with it presents some very cool solutions and ideas for future MOCs.